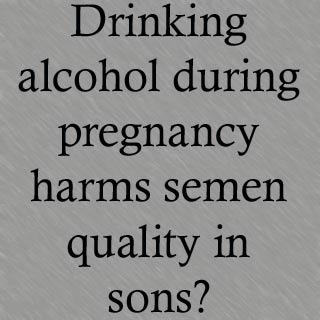 Pregnant women are often warned about the dangers of consuming alcohol. Here is one more reason to avoid it. As the doctors from Denmark predict that expecting mothers drinking alcohol can possibly damage the fertility of their future sons. They observed a significant damage in the semen quality of sons exposed to alcohol in the womb.

The sperm concentration of sons exposed to alcohol and not exposed to alcohol in the womb was calculated after around 20 years. During the analysis the authors discovered the sperm concentration as third lower in the sons of alcohol drinking mothers. The difference appeared in women who had consumed 4.5 or more drinks a week while expecting. It should be mentioned that a drink was counted as 12 grams of alcohol which is equal to a 330 ml beer, one small i.e. 120 ml glass of wine or one glass of spirits which is 40 ml.

“Our study shows that there is an association between drinking a moderate amount of alcohol (about four to five drinks a week) during pregnancy and lower sperm concentrations in sons. However, because this is an observational study we cannot say for certain that the alcohol causes the lower sperm concentrations. It is possible that drinking alcohol during pregnancy has a harmful effect on the foetal semen-producing tissue in the testes – and thereby on semen quality in later life – but our study is the first of its kind, and more research within this area is needed before any causal link can be established or safe drinking limits proposed,” quoted Dr Cecilia Ramlau-Hansen, senior researcher at the Department of Occupational Medicine, Aarhus University Hospital (Denmark) and clinical associate professor at the Department of Epidemiology, Institute of Public Health, University of Aarhus.

They authors examined 347 sons of 11,980 women with singleton pregnancies. All the study samples were initially recruited by the Danish ‘Healthy habits for two’ study from 1984-1987. A questionnaire was filled in by expecting mothers approximately during the 36th week of pregnancy. It included questions on their lifestyle and health. The follow up of the study was also undertaken from 2005-2006 as the sons were aged 18-21. The scientists collected and scrutinized samples of blood and semen from the sons.

All the sons were then categorized into four groups. The first group encompassed sons who were least exposed to alcohol as their mothers had seemingly consumed not more than a drink in the entire week. This formed the reference group and the other remaining groups were measured with them. The other three groups included sons of mothers drinking 1-1.5 drinks a week, 2-4 drinks a week and 4.5 or more drinks per week, respectively. According to the World Health Organization, the normal level of sperm concentration should be around 20 million/ml or more.

Dr Ramlau-Hansen explained, “Our finding that sons prenatally exposed to 1-1.5 drinks per week had higher semen volume and total sperm count compared to the least exposed group is not surprising and is quite a common finding when studying alcohol. It could indicate that small amounts of alcohol have a beneficial effect (for example, on the semen-producing tissue in the foetal testes), but, in fact, we believe this result may be biased by the characteristics of the women drinking small amounts of alcohol during pregnancy or by inaccurate reporting of alcohol consumption. Therefore, it is not possible to draw a firm conclusion from this result.”

Sperm concentration of 25 million per milliliters was ascertained in sons of mothers drinking 4.5 or more alcoholic drinks a week. On the other hand, sperm concentrations of 40 million/ml was discovered in sons who were least exposed to alcohol. The investigators claimed to have adjusted some confusing factors to identify around 32% lower average sperm concentration in the sons belonging to the group of being most exposed to alcohol when compared to the least exposed group. Also the investigators aimed to determine any effect caused due to father’s consumption of alcohol.

Dr Ramlau-Hansen affirmed, “We investigated the association between fathers’ total alcohol intake and semen quality in the sons and found that paternal alcohol was not associated with semen volume or sperm concentration. This finding suggests that the observed associations between maternal alcohol consumption and sons’ semen quality are not confounded by lifestyle factors that are shared by a couple, such as smoking.”

Dr Ramlau-Hansen associated prenatal alcohol exposure to semen volume and total sperm count, affecting a man’s fertility. The highest sperm count and semen volume supposedly appeared in sons whose mothers drank 1-1.5 drinks a week. However, no correlation was found in alcohol exposure and the movement and shape of the sperm or with any reproductive hormones such as testosterone.

The author explained that a further research will be undertaken to ascertain the link between maternal alcohol consumption and low semen concentration in sons. Once it is proved scientists may be able to clarify reasons of poor semen quality during the last decades and also explain the difference noted between various populations. They informed that the fertility in comparison with populations may differ between pregnant women consuming alcohol and non-alcohol consuming expecting mothers.

The study is published online in Human Reproduction journal.