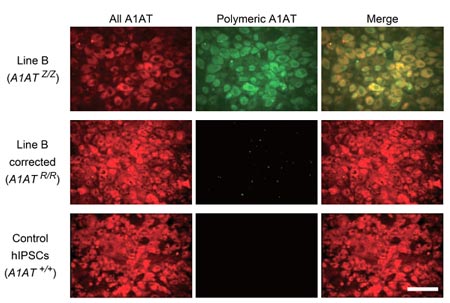 Of late, stem cell therapy has touched upon every sphere, be it for the treatment of vision loss or diabetes. In this trial, scientists from the Wellcome Trust Sanger Institute and the University of Cambridge have supposedly corrected a human gene mutation in a person’s stem cells and thus inched closer to the development of patient-specific therapies.

The patient possessed a gene mutation responsible for both cirrhotic liver disease and lung emphysema. The team apparently rectified the pattern of the individual’s genome and discarded all exogenous DNA. Seemingly, the modified gene functioned normally. The researchers made use of human induced pluripotent stem cells (hiPSCs) for the test as they can be converted to any tissue when they are engineered in a Petri dish.

“We have developed new systems to target genes and integrated all the components to correct,efficiently, defects in patient cells. Our systems leave behind no trace of the genetic manipulation, save for the gene correction,” remarked Professor Allan Bradley, Director Emeritus of the Wellcome Trust Sanger Institute.

In this analysis, the team examined a deficiency due to a mutation in alpha1-antitrypsin that plays a role in protecting the liver from inflammation by synthesizing a protein. Persons with the mutant form of this gene may not be able to produce this shielding protein and subsequently develop liver cirrhosis and lung emphysema.

The investigators precisely corrected the alpha1-antitrypsin gene in the region of the cell line comprising the mutation. They used molecular scissors to slice the genome minutely at the appropriate location. They then injected the right version of the gene with the help of a DNA porter namely piggyback. The series of this transporter was consequently eliminated from the cells, which seemed to transform them into liver cells without any signs of residual DNA impairment at the portion of correction.

The researcher’s then affirmed that the accurate copy of the gene would work naturally in the liver cells they had created. They presented the prevalence of normal alpha1-antitrypsin in the test tube as well as mouse tests.

The analysts are positive about the development of this technology and its benefits in treating patients. They conclude that this research could pave the path to personalized cell therapy for genetic defects of the liver.

The findings are published in the journal, Nature.