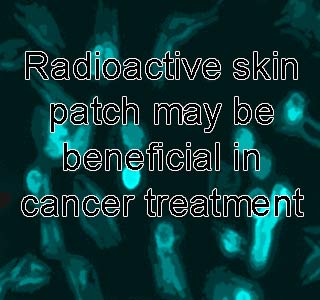 According to a latest study, basal cell carcinoma known to be one of the most common types of skin cancer can be successfully treated by means of a radioactive skin patch. It was believed that the skin patch sets free radioactive phosphorus-32. Apparently, the skin patch is nontoxic and could be an excellent substitute to treatments which are difficult to carry out like surgery or radiotherapy. Atleast this is what the experts at the SNM’s 56th Annual Meeting believe.

Supposedly, one million Americans every year are diagnosed with basal cell carcinoma that forms in the epidermis. It is to be believed that in most cases cancer may not fatal but it would be better to treat them through surgery or radiotherapy in order to prevent it from spreading further.

Surgery requires hospitalization, whereas radiotherapy requires multiple visits to a radiotherapist. It is to be believed that these treatments don’t provide a complete cure. Supposedly, these treatments may leave behind a permanent scar on the face of those patients suffering from a cancer on the face. And it may also possibly result in complications, especially for cancers developing close to the eyes, nose or mouth. Apparently, in 80 percent of the cases the basal cell carcinoma is believed to appear on the head or neck.

Study lead author Priyanka Gupta, a nuclear medicine technologist in the Department of Nuclear Medicine, All India Institute of Medical Sciences, New Delhi, says that, “While basal cell carcinoma is rarely fatal, it can be a painful and disfiguring disease.”

For the purpose of evaluating this criterion, a study was carried out wherein eight adult patients who had basal cell carcinoma on the face were selected. None of the patients were believed to have cancer cells in underlying facial structures. They were told to try the patch instead of surgery or radiotherapy. Purportedly, the patches containing radioactive phoshorus-32 which carry beta radiation to the cancer site were specially made according to the shape and size of the skin cancer lesions of every individual patient. It was believed that the patches were placed on the cancer site for a period of about three hours. As per the directions, the patches were reapplied twice again on the following days, each for a duration of about three hours on each patient’s cancer sites. Supposedly the treatment took a week’s time to direct.

“It’s exciting to think that this patch can deliver treatment on an outpatient basis with little risk of the scarring or other complications that surgery or radiotherapy present. This study opens a new dimension not only for treating skin malignancies, but also for nuclear medicine therapy in general.” adds Gupta.

It is believed that 3 months after the treatment, the patients’ skin cancer sites didn’t seem to have left behind any malignant cancer. However the treatment seemed to only have a few undesirable effects, which may have resulted in negligible scarring. Apart from this it was also noticed that regular blood and biochemical exams didn’t seem to reveal any harm from the radioactive patches.

Supposedly, the study seems to have suggested that Phosporous-32 may not be detrimental as it does not release any harmful radiation. The study also claims that because of its limited range it may have prevented beta radiation from reaching the bone or underlying blood vessels, and apparently spared the bone and bone marrow.