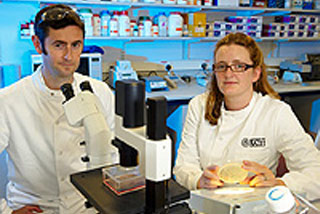 The bacteria Methicillin Resistant Staphylococcus aureus (MRSA) is assumed to cause various difficult to treat infections in humans. But what makes it so deadly? Scientists from the University of Bath have apparently solved this mystery as they claim to have analyzed the way the bug moves from the bloodstream to invade organs in the body. Ability to resist treatment with most antibiotics qualifies MRSA to be very dangerous.

During the research investigators examined the Fibronectin Binding Protein (FnBP). This protein is assumed to be found on the surface of the bacterium, further allowing it to bind to human cells and infect them.

Dr Andrew Edwards, a postdoctoral researcher from the University of Bath’s Department of Biology & Biochemistry, remarked, “The 3D shape of FnBP interested us because it contains a portion that’s repeated lots of times in the overall structure. We wanted to find out why it needs so many repeats. We found that although only one repeat was needed to bind to cells, altering the protein to contain a smaller number of repeats reduced the strength of binding and resulted in a less severe infection.”

While conducting the research, scientists revealed that the protein is central to the bacteria’s ability to attack and infect the organs. A further analysis will be commenced to impede the bacteria invading human cells. This will be done by employing antibodies which are seemingly able to block FnBP binding.

Dr Ruth Massey, Senior Lecturer from the University of Bath’s Department of Biology & Biochemistry, commented, “If we can develop a treatment that blocks the binding of FnBP to cells, it could help stop the infection spreading to the major organs in the body. Whilst such a treatment wouldn’t kill the bacteria, it could be used in parallel with antibiotics to stop the infection becoming more dangerous and spreading to the patient’s organs.”

Additional investigation determining the way FnBP binding can be restricted is claimed to last for the next three years. Scientists will also be working on finding out a treatment for patients will this ailment.

The research is published in the open access journal PLoS Pathogens.