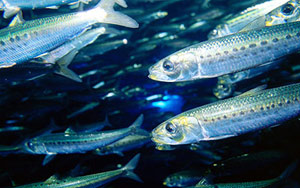 Fish oil seems to offer a host of health benefits. Studies have proved that fish oil can help to protect the heart, preserve thinking ability in the elderly, boost children’s hand-eye co-ordination and to combat depression.

Now, yet another study by researchers at University Laval’s Institute of Nutraceutics and Functional Foods, Canada, shows that omega-3 fatty acids from fish oil have a positive effect on the metabolism of muscle proteins.

The researchers have stated that this finding could have significant implications in the fields of animal farming as well as human health.

In mammals, the ability to use nutrients from food and convert them in muscle proteins decreases with age.

In order to do so, they added supplements containing either omega03’s from fish oil or a mixture or cottonseed and olive oils without omega-3’s to the regular diet of steers.

After five weeks, animals with the marine omega-3 diet showed increased sensitivity to insulin which, in turn, improved protein metabolism: twice the amount of amino acids was used by their bodies to synthesize proteins, especially in muscles. So it appears that omega-3 fatty acids added to the steers’ diet replaced other fatty acids in muscle cells and improved their functioning.

This finding could have significant implications in the field of animal farming, as it could prevent muscle decline by restoring insulin sensitivity in aging animals, says lead author Carole Thivierge

“Adding fish oil to their diet could prevent this decline by restoring insulin sensitivity in aging animals,” she said.

“In addition, it could contribute to reducing the amount of by-product emissions in the environment, since animals that are given omega-3’s spontaneously eat 10% less food to achieve the same weight gain,” she added.

The researchers also believe that restoring insulin sensitivity through the use of marine omega-3 fatty acids could also prevent the loss of muscle mass in older people and, by the same token, prevent the various health problems associated with it.

She also suggests that omega-3’s could help athletes trying to increase their muscle mass.

“However, it should not be seen as a miracle product. For increased muscle protein metabolism to take place in people younger than 50, physical training is still required,” she concludes.