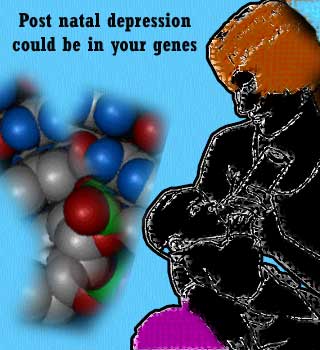 Have you ever given post-natal depression serious thought? Especially since many women are actually unaware of the serious threat it poses to their life. Well Britain researchers have now discovered that the severe form of post natal depression, a mental disorder known as postpartum psychosis in mothers, especially first time moms may have a genetic link.

Linked to suicide and infanticide, post-natal depression or serious mood disorders was earlier thought to be associated with a mother’s personality, hormonal changes and circumstances. However researchers part of the present study have a completely different story to tell. The joint effort of scientists from the Cardiff University, Birmingham University and Trinity College, Dublin indicates that there are chromosomal regions that supposedly harbor genes that may cause postpartum psychosis in women.

Lead researcher, Dr Ian Jones, head of psychological medicine at Cardiff, remarked, “Postpartum psychosis is classed as among the most severe episodes of illness seen in clinical practice. The consequences for the mother, infant and family are so serious that such episodes require close attention, often including hospitalization. We have identified chromosomal regions that are likely to harbour genes that predispose individuals to postpartum psychosis”

The study brings to light that fact that though most are highly prone to emotional and irritable symptoms after giving birth commonly called baby blues, post-natal depression needs to be addressed more seriously. The condition is a long-term one affecting nearly 10-15% mothers. It keeps the mother away from her baby stops her from creating an emotional bond with her new-born tot. The condition may worsen in some women who when left untreated can cause harm to the baby to the extent of killing themselves or their baby.

The researchers found that a particular recessive gene ups the chances of certain women to postpartum psychosis. Presently nearly one in 500 new mothers is affected by a severe form of the condition. In Britain alone reports indicate as many as 17,250 late-onset cases that go undetected every year.

With further studies researchers are positive of coming to a treatment for this condition.

The Bipolar Disorders journal is due to publish this distinct study.