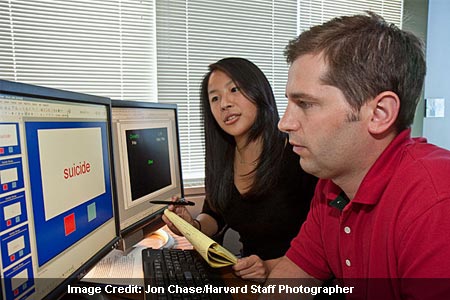 With suicide rates shooting up tremendously, scientists across the globe are carrying out investigations for predicting a person’s risk of committing suicide. If the psychologists at Harvard University are to be believed, then they have laid hands on two novel tests for forecasting an individuals risk to attempt suicide. The tools apparently disclose the means to treat potentially suicidal patients.

The newly discovered tests may allow investigators to stop being dependant on self-reporting by at-risk individuals. The provided information often tends to be misleading when suicidal patients do not wish to display their intentions. Having employed a computer, authors claim to conduct the tests within minutes. This procedure seems to provide a speedy look into the way patients think about suicide and their inclination to try committing suicide. The study results supposedly identify two behavioral markers. While the first one is the patients attention to suicide-related stimuli, the second may be the extent to which they related death or suicide with themselves.

Matthew K. Nock, a professor of psychology at Harvard and author of two papers describing the new assessments of suicidal behavior quoted, “Experts have long sought a clear behavioral marker of suicide risk. The current approach, based on self-reporting, leads to predictions that are scarcely better than chance, since suicidal patients are often motivated to conceal or misrepresent their mental state. We sought to develop more sophisticated, objective measures of how psychiatric patients are thinking about suicide. Our work provides two important new tools clinicians can use in deciding how to treat potentially suicidal patients.”

In order to affirm the ability of the tests two studies were undertaken. In the first study, 124 patients in a psychiatric emergency department were encompassed. These patients were subjected to an altered Stroop test that is known to measure speed in articulating the color of words on a computer screen. As a result, the study authors were able to ascertain suicidal individuals to be more attentive while viewing suicide-related words as compared to neutral words.

The second study employed the Implicit Association Test to analyze reaction times to semantic stimuli. The scientists then calculated 157 subjects’ automatic mental associations. So the correlation between words related to ‘self’ and words related to either ‘life’ or ‘death/suicide’ were monitored. All the study participants visualized pairs of words on a screen, with response speed revealing unconscious associations between the terms.

Nock enlightened, “These findings suggest that a person’s implicit cognition may guide which behavior he or she chooses to cope with extreme distress. More specifically, an implicit association with death/suicide may represent one of the final steps in the pathway to suicide.”

A potential unconscious link appeared between a rapid response to stimuli of self and death/suicide. Study authors suggested that participants displaying a strong relation between the words self and death/suicide faced a six fold higher risk of committing suicide. They would be probably attempting suicide within the next six months than those showing stronger link between self and life.

The study is published in the current Journal of Abnormal Psychology and the other in Psychological Science.