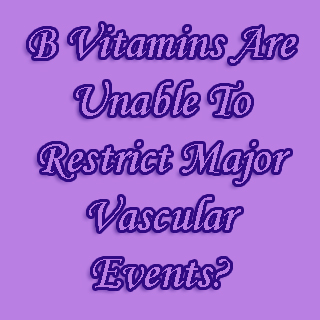 Investigators aimed to ascertain if a daily supplement of B vitamins reduces total homocysteine. Tests were also undertaken to analyze whether the vitamins are able to decrease the combined incidence of non-fatal stroke, non-fatal myocardial infarction, and death attributable to vascular causes in patients with recent stroke or transient ischaemic attack of the brain or eye. A randomized, double-blind, parallel, placebo-controlled trial was conducted by the scientists.

This trial enrolled patients suffering from a stroke or transient ischaemic attack in the past 7 months. These patients were gathered from 123 medical centers in 20 countries. The study subjects were given a daily tablet of placebo or B vitamins which contained 2 mg folic acid, 25 mg vitamin B6, and 0.5 mg vitamin B12. On a random basis, the participants were either provided with a central 24-h telephone service or an interactive website. It was mentioned that the selection was done by employing random permuted blocks stratified by hospital.

The experts revealed that all the study subjects, clinicians, care takers and investigators were not disclosed to the assigned intervention. Achieving the combined results of stroke, myocardial infarction, or vascular death was affirmed to be the primary endpoint. All participants of the study were encompassed in the analysis of the primary endpoint. From November 19, 1998 to December 31, 2008, the scientists randomly categorized 8164 patients to receive B vitamins or placebo. While 4089 were selected to accept B vitamins, 4075 would be getting placebo.

For a median duration of 3.4 years wherein IQR 2.0—5.5, the study subjects were scrutinized by the authors. Primary endpoint was possibly achieved by 616 patients receiving B vitamins which comprised 15 percent. Placebo getting 678 patients forming 17 percent were also claimed to reach the primary endpoint. It was noted that the risk ratio (RR) was 0.91, 95%, CI was 0.82 to 1.00 and p was equal to 0.05. Scientists revealed that the absolute risk reduction was 56%, − 0.01 to 3.16.

No major adverse reactions or extreme variations in common adverse effects occurred between the treatment groups. Patients with recent stroke or transient ischaemic attack provided with folic acid, vitamin B6, and vitamin B12 were seemingly free from danger. Yet no considerable benefits of reduction in major vascular events were noticed in patients receiving B vitamins as compared to those provided with placebo. So B vitamins may not avoid repeated incidence of stroke. It was ascertained that the findings of ongoing trials and an individual patient data meta-analysis will be included to present estimates of the effect of B vitamins.

The study was published in the Lancet Neurology, Early Online Publication on 4 August 2010.