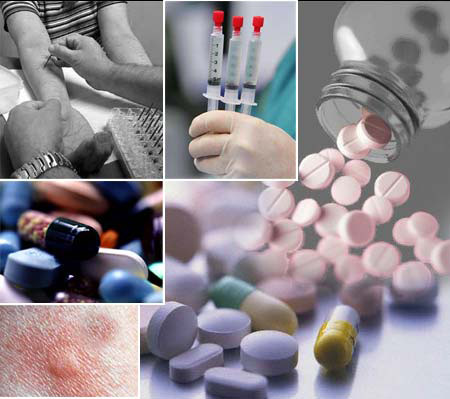 Which drugs cause allergies?

Although any drug can cause an allergic reaction, antibiotics are the most common source of drug-related allergies.

An allergic reaction is caused by hypersensitivity of the immune system. A hypersensitive reaction, occurring only in a few people, is a misdirected response against a substance that is usually of foreign origin. In case of drug allergies, the drug molecules are recognized as harmful foreign substances by the immune system .The body becomes sensitized (the immune system is triggered) by the first exposure to the drug. The second or subsequent exposure causes an immune response.

How is it different from a side effect?

A “side effect” is usually not related to the immune system â€“ it is a general effect seen in various organs throughout the body. For example, sleep induced by pain killers. Chemotherapy drugs cannot discriminate between cancerous cells and normal cells in the body. Hence besides killing tumor cells, it also damages other organs and systems of the body.

Reactions to a drug can occur as quickly as a few minutes of taking the medication or may take several days. Symptoms range from mild and irritating like:

to severe life threatening conditions like Anaphylaxis which is a systemic and shock-like Type-I hypersensitivity reaction. It usually occurs immediately after taking a drug. It can cause difficulty breathing, increased heart rate, and decreased blood pressure.

Symptoms of anaphylaxis include:

Risk increases with repeated exposure. So just about anyone can develop a drug allergy regardless of how sensitive his or her immune system is to a drug.

Skin testing to check for hives and rashes is performed. 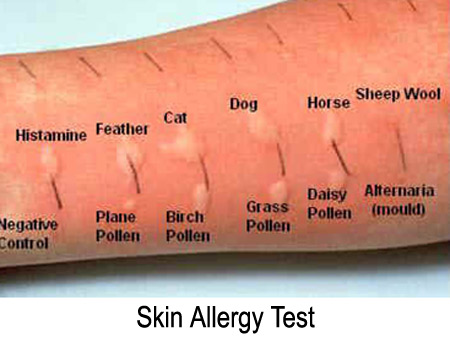 This may confirm Penicillin allergy but may be ineffective or even dangerous for other medications. A history of such reactions is considered adequately diagnostic.

A blood test (RAST) can only confirm the occurrence of an allergic reaction. However, it is reliable only in the case of penicillin, amoxicillin, sulphonamide and cephalosporin. If other drugs are suspected, skin testing followed by challenge tests are employed. Challenge tests are performed by administering slowly increasing the strength of dosage to check the resistance of the patient at minimum risk. Patch tests on the skin are also used in some cases.

What is the Treatment?

Immediate withdrawal of the suspected drug is the first step in most cases.

All treatment is reactionary as preventive treatment is not possible. It primarily involves relief of symptoms and preventing the consequences of severe reaction, if any.

Antihistamines usually relieve mild symptoms such as rashes and itching. Topical (applied to a localized area of the skin) corticosteroids may also be used for the same. Bronchodilators are used to relieve asthma-like symptoms. Epinephrine injection may be necessary to treat anaphylaxis. The prompt use of adrenalin and steroids is life saving.

Occasionally, an allergy may respond to desensitization (immunotherapy) in which increasing doses are given to improve tolerance to the drug.

There is no known way to prevent development of a drug allergy. In people who have a history (known drug allergies), avoiding the medication is the best means of prevention. In some cases, the medication may be given safely after pre-treatment with corticosteroids, antihistamines etc.

How can I avoid drug allergies?

If you discover that you have a drug allergy, make sure you remember what it is, and always tell your doctor or pharmacist about it. This will help them determine which medications you should receive in the future.

If you are allergic to a class of drugs, for example, penicillin derivatives, then all other members of that class should be avoided unless tests prove they are safe.

If you are taking a fairly high number of medications, write down details of names and dosage. If possible, such information should also be known to family members and your emergency contacts. Remember that almost all drugs are inorganic synthetic molecules and cause some disturbance in the body, no matter how small. Also, it is possible to develop an allergic reaction to almost any drug including paracetamol. So only use medication if it is absolutely necessary or it has been prescribed to you. Never use someone elseâ€™s medication without medical advice.

A typical city dweller may be consulting more than one doctor for different conditions. And prescription trends being as they are, chances of a cross-reaction are high. So always remember to inform your doctor of other medications you may be on.

As we have seen, drug allergies are uncommon. But at the same time, any drug can act as an allergen. Antibiotics are the most frequently encountered drug in such cases due to their indiscriminate use. Many of us are in the habit of taking antibiotics at the slightest sign of cough and cold. Unlike drug resistance which can develop from such injudicious use, increased consumption does not actually increase the number of people with allergies. But it does spawn cases that can otherwise be avoided. It would also help if some doctors went easy on their pens.

Since life-threatening conditions such as anaphylaxis are extremely rare, checking for drug allergies before hand is not given terminal importance. However, it can be of utmost importance in cases of pregnancy or a serous illness that requires administering of a drug the patient is allergic to. Hence, once an allergy is discovered, the patient should always remember it and mention it to his physician so that it is considered for all future medical procedures.

Although pre-emptive checking for allergies to the most common drugs would prove to be useful information on a patients chart, it is not on the list of priorities in developing countries where basic healthcare and large-scale disease eradication are the main concerns. Immediate treatment of severe reactions such as by epinephrine injections should however be available at all medical centers.