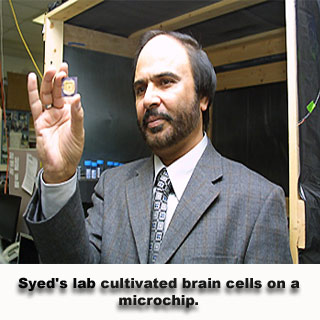 With advancement in technology and inventions, scientists are finding means to employ latest techniques in understanding the human brain. Investigators from the University of Calgary, Faculty of Medicine have developed a unique neurochip that is assumed to examine brain cell activity at an extremely high resolution. A network of brain cells can be seemingly cultivated and reconnected on the created silicon chip or the brain on a microchip.

Investigators claim that the neurochip is easy to use and can help understand the way brain cells work under normal conditions. After achieving an accurate insight of the brain cells, physicians may be able to prescribe medications for various neurodegenerative diseases like Alzheimer’s and Parkinson’s.

“This technical breakthrough means we can track subtle changes in brain activity at the level of ion channels and synaptic potentials, which are also the most suitable target sites for drug development in neurodegenerative diseases and neuropsychological disorders,” added Syed, professor and head of the Department of Cell Biology and Anatomy, member of the Hotchkiss Brain Institute and advisor to the Vice President Research on Biomedical Engineering Initiative of the U of C.

Since the neurochips are automated, any individual can possibly learn to place brain cells on them. In order to simply record ion channel activity from brain cells, it probably took years of training. One more difficulty was that only one or two cells could be examined at a time. In the present day technology, larger networks of cells can be placed on a chip. These cells can be seemingly scrutinized in detail allowing investigators to inspect several brain cells networking and performing automatic, large-scale drug screening for several brain dysfunctions.

Scientists anticipate that this technology can be employed in a variety of fields and on several research projects. It can be a novel tool for medium throughput drug screening, in addition to its usefulness for basic biomedical research.

The research is published online in August issue of the journal, Biomedical Devices.