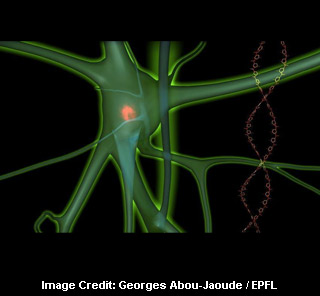 Over the past years, investigations have pointed out that genetic factors probably play a pivotal role in Parkinson’s disease (PD). With that in mind, scientists from the Ecole Polytechnique Fédérale de Lausanne (EPFL) in Switzerland have fabricated a new mammalian model for examining a specific gene mutation generally present in PD patients. The research can supposedly aid in designing novel drugs for fighting PD.

A mutation of the gene coding for LRRK2, a large enzyme in the brain, apparently is the most prevalent genetic cause of the disease. On mutation, this enzyme possibly becomes hyperactive leading to death of vulnerable neurons and a decline in the levels of the brain neurotransmistter dopamine. Such a reduction in dopamine levels reportedly gives rise to PD symptoms, including tremors, instability, impaired movement, and later stage dementia. During the present investigation, experts successfully introduced mutant LRRK2 enzyme into one hemisphere of a rat brain. As a result, PD manifestations occurring in humans within one side of the rodent’s body were achieved.

The research is published on February 2, 2011, online in the Journal of Neuroscience