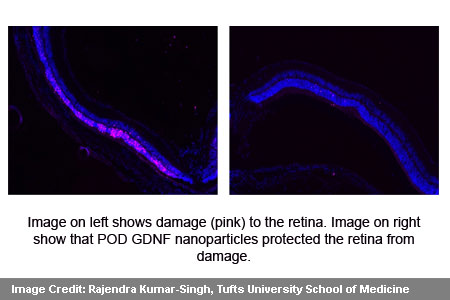 Most eye disorders like AMD and Retinitis pigmentosa apparently lead to complete loss of vision. Previously researchers had gauged a possible cure for such degenerative vision diseases. Experts from the Tufts University School of Medicine and the Sackler School of Graduate Biomedical Sciences at Tufts claim that non-viral gene therapy can delay the onset of some forms of eye disease and preserve vision.

Nanoparticles were developed by the researchers for delivering therapeutic genes to the retina. It was observed that as compared to the controls, treated mice temporarily retained more eyesight. The findings can possibly aid scientists in determining a non-viral gene therapy treatment for degenerative eye disorders. Experts conducted an experiment on a model simulating the progression of human retinal degeneration. Mice were treated with nanoparticles having the Glial Cell Line-Derived Neurotrophic Factor (GDNF) gene. It is believed to be a protein safeguarding the photoreceptor cells in the eye.

Rajendra Kumar-Singh, PhD, associate professor of ophthalmology at Tufts University School of Medicine (TUSM) and member of the genetics, neuroscience and cell, molecular, and developmental biology program faculties at the Sackler School of Graduate Biomedical Sciences at Tufts and the senior researcher, affirmed, “Our work shows that it is possible to attain therapeutic results using non-viral gene delivery methods, specifically, nanoparticles. Nanoparticles, which are small enough to penetrate cells and stable enough to protect DNA, are capable of preventing retinal cell death and preserving vision. The most common approach to gene therapy involves using a virus to deliver DNA to cells. While viruses are very efficient carriers, they can prompt immune responses that may lead to inflammation, cancer, or even death. Non-viral methods offer a safer alternative, but until now, efficiency has been a significant barrier.”

The outcome was that retinas with the GDNF-carrying nanoparticles displayed considerably less photoreceptor cell death than controls. Since the cells continue to remain preserved, better eyesight was supposedly enjoyed by the treatment group after seven days of the treatment, as compared to controls. However, the GDNF-carrying nanoparticles were seemingly able to provide only temporary protection. Fourteen days after treatment no variation in eyesight between treated mice and controls was monitored.

Researchers will be undertaking further experiments to extend this protection, by including elements to the DNA that may allow its retention in the cell. Investigations and clinical application of non-viral gene therapy are anticipated to help experts estimate a precise treatment.

The research was published in Molecular Therapy.