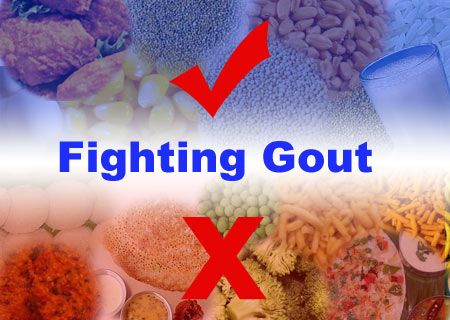 In today’s fast paced world, with the umpteen stresses on our minds, what we’re going to eat could be of least concern. But you might want to note that what you eat is ultimately made up of chemical molecules and its going to make a difference to your body’s chemical composition. So one must be very careful as to what their diet includes especially when suffering from gout.

Gout is a genetically determined disease where there is an increased concentration of uric acid in the body. Due to various factors, this extra uric acid is not cleared out by the urinary system as it should be and starts accumulating in various parts of the body. When sufficient MSU (mono sodium urate) accumulates within joints, several factors, such as trauma, abrupt dietary changes, acute illness, surgery, dehydration, and administration of serum urate-lowing medications, probably induce acute MSU crystal precipitation within joints or shedding of crystals from deposits in synovium into synovial fluid of the joint.

Joints and the kidneys are the commonest targets. Among the joints, that of the great toe is the most commonly affected one, presenting with sudden onset of severe pain, swelling and redness. Other joints likely to be affected are those of the mid-foot and ankle joints. The attacks are mostly self-limiting, resolving spontaneously within 1-2 weeks even without therapy. In kidneys, concretions of uric acid crystals lead to formation of kidney stones. The latter may lead to urinary infections, severe abdominal pain and passage of frank blood in urine. Recurrence is common as regards to both the joint pains and the stones. Eventually it might start involving more than one joint mainly the knees, wrists, elbows, finger joints. Hips, shoulders and the spine are rare accomplices. Thus, it is necessary that the accumulation of this extra uric acid be controlled and maintained within normal range.

As it is a genetically determined trait, there is no way to predict who may develop it and when will they manifest it, but family history of gout or kidney stones is a strong indicator towards high likelihood of its occurrence in the future. Also, post-pubertal men and post-menopausal women are most likely victims of gout but it maybe seen in younger age groups as well. According to the National Institute of Arthritis and Musculoskeletal diseases of America, gout can go through four different stages:

1. Asymptomatic gout: There are no presenting symptoms but there is an elevated serum uric acid level in blood. As there are no discomforting symptoms, no treatment is required.

2. Acute gout arthritis: Due to raised uric acid levels (hyperuricemia) there is deposition of uric acid crystals in joints. Sudden onset of severe pain, redness and swelling of joint is noticed. Early attacks subside spontaneously within 2 weeks without treatment.

3. Asymptomatic gout interval: There is almost always a period between attacks of gout where the patient is symptom free and joint function is back to normal.

4. Chronic tophic gout: After many years of hyperuricemia, patients go into permanent depositions of uric acid crystals in the joints called Tophi which lead to disabling deformities and permanent damages to the kidney.

Determination of serum uric acid levels via a blood sample is the investigation of choice to identify chronic gout and to monitor need and efficacy of therapy for the symptoms of the same. Routine urine samples may also reveal presence of uric acid crystals. X-rays of joints do not provide diagnostic information with an X-ray of kidney probably revealing kidney stones if the uric acid crystals have already formed stones but no changes can be seen prior to that. Acute gout may be diagnosed by synovial fluid aspiration from the affected joint and checking its biochemistry and microscopic appearance for presence of uric acid.

Conventional therapy involves non-steroidal anti-inflammatory drugs and analgesics. Colchicine ingestion, steroid injections have also known to be efficacious especially in acute attacks. Uricosuric drugs that lower serum uric acid levels may also be given. Allopurinol therapy is also known to be effective. Following are important changes in daily diet that must be followed to keep uric acid levels in check, minimize symptoms and maximize therapy efficacy:

Foods to Avoid: All dals and products of dal should be avoided. This includes urad dal and its preparations like idli, dosa, uttappa etc. Food items like vada, sev, gathiya made from chana dal, moong dal and toor dal should also be avoided. Patients may also stay away from pulses like rajma, chowli, chole, chana, moong, vaal, etc. Vegetables like green peas, spinach, soya, broccoli; nuts such as cashewnuts and almonds; sea food like crab, prawns, lobster, sardines and anchovies; red meat and alcohol are some of other things that must be avoided.

Consumable Foods: In the list foods that can be consumed are cereals like wheat, corn, jowar, bajra, rice, and rawa; milk and milk products; all fruits; all vegetables except ones mentioned above; non-vegetarian preparations like chicken, eggs and fish as well as groundnuts and peanuts. Patients are advised to consume at least 4-5 liters of water. A regular consumption namely atleast 750ml/day of milk/ curds/ buttermilk is also advised. While consuming nachni or ragi twice a week, patients can also eat idlis, dosas or dhoklas made from a rawa. They may also include high potassium content foods like bananas, raw vegetable juices, green leafy vegetables, potatoes and beans in their diet.

Keeping mental stress at bay, those suffering from gout should also abstain from crash dieting with poor protein intake. While staying away from unaccustomed physical exercises and alcohol along with the foods listed in the avoid category will help patients fight this condition. One can look forward to lessened frequency of gout attacks and better uric acid level control if this diet is followed strictly and regularly.