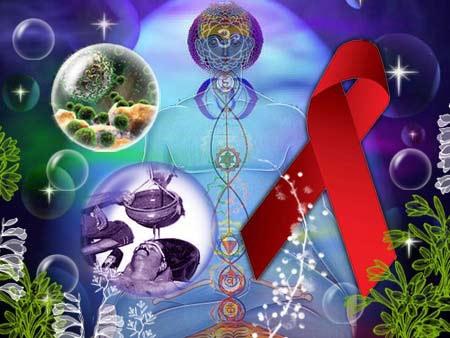 Though the phenomenon of AIDS has been recognized by modern medicine only around 20 years ago due to the discovery of a strain in a species of monkeys found in Africa; Ayurveda appears to have actually established its identity about 2000 years ago.

In Ayurveda, HIV has even been ascribed to unhygienic habits which could be due to poor personal hygiene. It is still debatable as to whether modern-day AIDS and the malady described in Ayurveda as RAJAYAKSHMA (The king of diseases) are exactly and precisely the same.

But this debate is a fruitless controversy. What is vitally important is whether the mode of treatment prescribed against RAJAYAKSHMA in ancient Ayurvedic texts can be applied successfully against HIV positive/AIDS. I am personally of the firm conviction that it can.

AIDS, that is Acquired Immunity Deficiency Syndrome is a malady whereby the immunity level of the human body is reduced drastically due to the destructive action of a virus in the bloodstream. This virus is particularly malignant because it impairs and ultimately destroys the functioning of vital bodily organs inevitably resulting in death.

The symptoms described in ASHTANGA HRIDAYAM by VAGBHATA (section:CHIKITSITAM), and its supplementary text, the ASHTANGA SANGRAHAM, as well as another Ayurvedic classic– the CHARAKA SAMHITA (Section: NIDANAM) are:

The root causes of the disease, according to the aforementioned Ayurvedic texts generally are:

Initially, the patient has to be given tonics and rejuvenators (RASAYANAMS) to upgrade the immunity level, and subsequently specific medicines to actually counter the virus.

AJAMAMSA RASAYANAM (prepared with cow’s milk ghee and extract of goat’s meat) along with INDUKANTHAM GHRITHAM are to be given for strengthening the system and stimulating appetite. Later, RASASINDOOR (prepared with purified mercury) along with a batch of medicines which impart strength to the patient are applied. If this is done for six months (depending on the severity of the case and its associated parameters) success is usually the result. However, the sort of success to be achieved may be qualified by the possibility that the virus has not been completely destroyed or eradicated, but simply rendered ineffective.

The virus may continue to lurk in the body, but is unable to cause further damage because of enhancement of the immunity level, and strengthening of the internal organs. A situation of peaceful co-existence may be achieved, and this may actually last for the remainder of the life span of the individual.

Once the patient begins to show signs of recovery, SHODHANA (elimination) techniques may be applied to discard the vitiated toxins from the body (detoxification) through enema, purgation, emesism, etc. The medicines given at this stage to the patient should not be hard, hot or drastic. They should be soft, ghee-based, eco-friendly so that the patient may comfortably withstand the effect of the medicines.

Once the general immunity system has improved, the blood should be sought to be purified with medicines which have a cooling effect on the body. After considerable purification of blood, the patient should be put on a diet which is strengthening, and non-vegetarian food items are recommended. Spicy, oily and acidic food should be avoided, but ghee preparations and soups are recommended. The medicines which raise the immunity level should also be capable of increasing the digestion metabolism, and strengthening the intestinal movements. Only then would the overall constitution be benefited, and this benefit would reach all parts of the body.

When non-vegetarian food is taken by the patient, a little alcohol is recommended as ANUPANA (carrier) to aid the digestion process, and also help remove the blocks in the blood vessels, aka SROTHORODHAM.

A bath should be taken twice or thrice daily with cold water, and after bath, a sandalwood paste should be applied on the body. This keeps the body and blood cool, and sandalwood penetrates into the follicles and purifies. It is also advisable to take such a bath after vigorous exercise, such as jogging or running so that the blood is warmed up, and some impurities/toxins are secreted through perspiration. Heated blood can also weaken, and even destroy, the virus in certain cases e.g. we have the experience of the athlete Ben Johnson who acquired HIV. If the patient is very weak and incapable of exercising or running, then steaming, i.e. SWEDANAM is recommended.

With the above mentioned procedure, I simply assure a longer span of life (and not HIV negative reports from positive reports), with a constitution and metabolism which function as close to normal as possible.