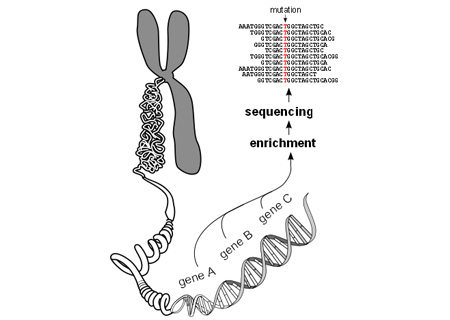 Several rare diseases are hereditary but regardless of important progress in genome research their precise cause is not yet clear. The examination of primary genetic defect is essential mainly for accurate diagnosis and formation of new methods of treatment. Experts from the Max Planck Institute for Molecular Genetics and the Institute of Medical Genetics at the Charité Universitätsmedizin have apparently used a new method with which all of the genes in the human genome can be evaluated concurrently.

The process was seemingly used for the first time on three children in a family who were affected from an uncommon form of mental retardation. The analysis highlighted a change in the PIGV gene that may lead to the inability of proteins. For example alkaline may lose its ability to cling to the surface of cell membranes. The findings reveal that the new genome sequencing approaches are supposedly appropriate for noting down individual alterations in the genome and for the detection of these changes as the cause of rare diseases.

“It was like the proverbial search for a needle in a haystack. We fished out solely the 22,000 genes from the entire genome, decoded their sequence and examined them for mutations. Using new bioinformatic analyses, we were able to limit the number of mutation candidates to two – one of which is ultimately responsible for Mabry Syndrome,” remarked Michal Ruth Schweiger from the Max Planck Institute for Molecular Genetics.

Scientists claim to use high throughput sequencing technology for the first time to examine the genetic defect behind an uncommon disease. The findings may help in the detection of the genetic risk in affected couples who would like to have children. Mabry Syndrome is apparently an unusual recessive genetic disorder that causes mental retardation, seizures and a characteristic change in the blood values of those individuals who are affected.

The augmented level of the enzyme alkaline phosphatase can be examined in the blood. The alkaline phosphatase generally plays a critical role in bone metabolism. Experts succeeded in revealing that in the case of Mabry Syndrome, the PICV gene is mutated. It further codes for an enzyme that is involved in the development of the GPI anchor. This carbohydrate molecule merges proteins to the cell membrane.

Experts also elucidate that the gene for PIGV is mutated is such a manner that the alkaline phosphatase is not effectively linked to the cell membrane. It detaches from the membrane, collects in the blood and seemingly causes a rise in blood levels. Scientists presume that PIGV present in the brain is apparently accountable for the anchoring of several other proteins. In addition, they share that this malfunction may be responsible for the mental retardation connected with Mabry Syndrome.

These findings may assist experts to conduct further analysis on the disease and form new options for its treatment. The approaches of genome analysis developed here enable the recognition of changes even in the case of uncommon diseases. It also highlights an essential step forward in the direction of individualized molecular medicine.

This new approach for genome analysis may highlight the genetic effect of an uncommon disease.