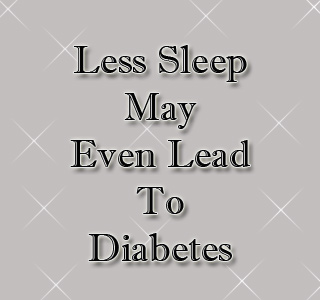 According to a latest study, people who sleep for less than six hours per night are 4.5 times more likely to develop diabetes as compared to those who sleep for about 6-8 hours. This study was conducted by the University at Buffalo.

The University at Buffalo is said to be a premier research-intensive public university and the largest and most comprehensive campus in the State University of New York system.

First author of the study, Lisa Rafalson, Ph.D., a National Research Service Award Fellow in the University at Buffalo Department of Family Medicine, says that, “Impaired fasting glucose — a reading higher than 100 — is known as pre-diabetes, which is a precursor to type 2 diabetes. In fact, about 25 percent of people who have impaired fasting glucose will at some point develop type 2 diabetes, which is associated with many complications, including heart disease and premature death.”

The study findings were based on data collected from a previous long term study, the Western New York Health Study. The participants of this particular study, who initially had normal glucose levels and later developed pre-diabetes by their follow up exam, were matched with those people who had maintained their normal glucose levels. The latter group of subjects served as controls in the study.

Participants were divided into three groups based on their sleeping habits – short sleepers, the ones who slept for less than 6 hours; long sleepers were those who reported sleeping for more than 8 hours per night and a reference group who slept for 6-8 hours a night.

It was found that those who slept for less than 6 hours had a higher chance of developing pre-diabetes as compared to those who got between 6-8 hours of sleep. It was also noticed that sleeping more than 8 hours per night had no significant effect on the glucose levels of the participants.

It is stated that this study provides further evidence to support the link administered between inadequate sleep and its adverse health effects. The study investigators hope that their findings may prompt further researches to be conducted on this particular topic. They have even suggested doctors to discuss their patient’s sleeping patterns and habits during annual visits, in order to prevent the occurrence of any health hazard.

Their findings were recently presented at the American Heart Association. This study was funded by the National Institutes of Health.