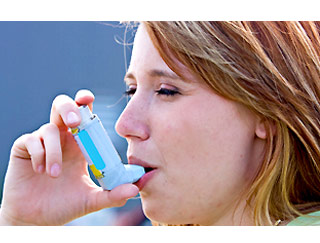 Previously we reported that experts from the University Medical Center of Johannes Gutenberg University Mainz examined how asthma develops. Now, researchers from the Yale University have identified three genes which contain genetic variations that appear to augment a child’s risk of developing asthma.

Researchers adopted several techniques to evaluate each of the genes. One method scanned the human genome and revealed a genetic change in the PDE11A gene. This gene is supposedly found in asthmatic children as compared to their non-asthmatic peers. Further, scientists revealed that majority of the asthmatics seem to have at least one genetic change in the PDE11A gene.

“We now believe that increased susceptibility to asthma and other complex human diseases is caused by very large numbers of quite rare genetic changes,” elucidated Michael B. Bracken, the Susan Dwight Bliss Professor of Epidemiology. “Each variant only increases risk slightly and many variants are likely needed in an individual to induce clinical disease.”

The findings were derived from the Perinatal Risk of Asthma in Infants of Asthmatic Mothers (PRAM) analysis. Researchers examined if the augmented risk of asthma among children of asthmatic mothers was due to genetic factors. In addition, they also evaluated how much is due to factors occurring in the intrauterine and perinatal period, particularly related to the mother’s own asthma status.

In a second analysis, the researchers used a unique method to grade candidate genes for asthma. Researchers thoroughly analyzed the published literature and identified genes previously reported to be linked with asthma. The top 50 genes were further examined for mutations in the PRAM analysis subjects. One of these genes which is known as RAD50 contained a mutation that was apparently linked with an amplified risk of asthma. This gene seemingly helps to regulate inflammatory responses. This highlights that mutations to the gene may modify immune system functioning and it may lead to a predisposition toward asthma.

Besides, the group simulated a connection between asthma and missing genetic material in the T-cell receptor gamma gene. Scientists revealed that this deletion was present in only a minute proportion of the cells accumulated for DNA extraction. This may be essential because it indicates that this type of mutation is not inherited and therefore may be caused by environmental factors.

Scientists conclude by revealing that these three genes highlight the complex nature of asthma and apparently support the hypothesis that several factors play a vital role in evaluating whether or not a child will develop the disease.

The findings will be published in three separate journals namely the Journal of Allergy and Clinical Immunology, Human Heredity and Mutation Research/Fundamental and Molecular Mechanisms of Mutagenesis.