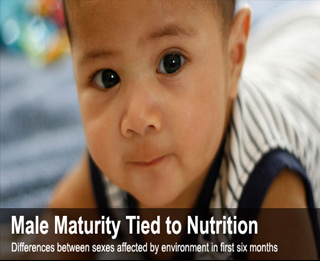 If you are still struggling to win over the nature versus nurture debate, then this tidbit may find you seeing some light. It’s nurture that possibly determines male to female differences. A latest study undertaken by the Northwestern University claims that baby boys growing rapidly in their first six months are mostly taller, stronger and have more sexual partners as adults than the ones who develop more gradually.

It is assumed that as youngsters, these boys reach early puberty, are taller, stronger and have elevated testosterone levels. Having examined 770 Filipino males aged 20 to 22 years, it was mentioned that well nourished infants developed more male characteristics as compared to their counterparts. Study authors observed that such boys had sex for the first time at a younger age and were more likely to report having had sex in the past month. So it can be assumed that they end up having more sex partners in their lifetime.

“Most people are unaware that male infants in the first six months of life produce testosterone at approximately the same level as an adult male. We looked at weight gain during this particular window of early life development, because testosterone is very high at this age and helps shape the differences between males and females,” quoted Christopher W. Kuzawa, associate professor of anthropology in the Weinberg College of Arts and Sciences and Institute for Policy Research fellow at Northwestern, study author.

Scientists hold the view that testosterone is a hallmark to such long-term effects. It has apparently been proved that genes are not the alone deciding factors, even the environment can affect sex differences. It was observed that on an average, men are taller and more muscular than females. This variation may strongly depend on nutrition provided within the first six months of an infant male’s life.

Kuzawa remarked, “There is a perennial question about how important heredity is versus the environment as shapers of who we turn out to be. In the last 20 years, a lot has been learned about a process called developmental plasticity — how the body responds early in life to things like nutrition and stress. Early experiences can have a permanent effect on how the body develops, and this effect can linger into adulthood. There is a lot of evidence that this can influence risk of diseases like heart attack, diabetes and hypertension — really important diseases.”

In the course of the study, it was ascertained that male characteristics like height, muscle mass and testosterone levels are associated to early life developmental plasticity. Scientists mentioned that the findings cannot be related to disease characteristics. It can therefore be concluded that differences between the sexes are responsive to the environment especially to nutrition.

The study was published on September 13 in the Proceedings of the National Academy of Sciences.