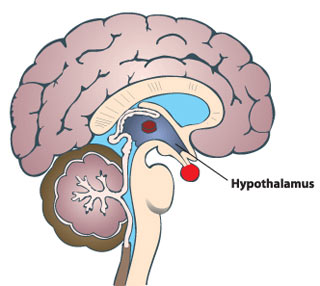 Researchers at Beth Israel Deaconess Medical Center in Boston claim to have identified the precise brain cells that cause a fever in the human body. Interestingly, they say that this area of the brain that causes fever would just about fit the head of a pin.

The researchers also said that the identified area in the brain which causes the body’s temperature to rise in response to inflammation is located within a part of the brain called the hypothalamus.

According to Dr. Clifford B.Saper, the neurologist and neuroscientist whose laboratory conducted the new work, fever and other symptoms that usually accompany it- like aches and pains, loss of appetite and the desire to lie down and pull the covers over one’s head- “may seem uncomfortable at the time.”

“But in fact, they are part of an adaptive response, coordinated by the hypothalamus, to help you survive an infection,” he said.

For this reason, fever can help the body kill any sort of bacterial infection. In the same way, loss of appetite may help deprive bacteria of much-needed glucose. The aches and pains may make a sick person lie down and conserve energy.

Basically, Dr.Saper described his work as part of an effort to “dissect molecularly what is going on in the brain when you have this response.”

The research has been published online by the journal Nature Neuroscience.

It is common knowledge that a fever occurs in response to inflammation, which can accompany bacterial and viral infections and even some non-infectious diseases like arthritis and the gastrointestinal disorder Crohn’s disease.

Now, these conditions cause the body to release hormones called prostaglandins, which cross into the brain and are responsible for fever, aches and other symptoms.

Dr.Saper explains, “When you have a fever, if you take some aspirin and the fever goes away, the reason is that the aspirin prevents the body from making prostaglandins.”