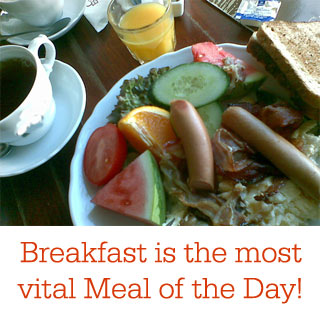 It’s a known fact that eating breakfast every morning keeps people healthy. But, now researchers have said that it serves a double purpose as eating a meal early morning also helps us keep in good shape.

Researchers at the University Of Minnesota School Of Public Health have found that teenagers who regularly eat breakfast tend to weigh less, exercise more and eat a healthier diet in general, compared to those who skip the first meal of the day.

The study involved 2,216 adolescents in the Minneapolis-St. Paul area of Minnesota whose lifestyle issues were followed for five years. At the time they entered the study they were just under 15 years.

The researchers discovered that the more regularly the teens ate breakfast, the lower their body mass index was. Those who always skipped breakfast on average weighed about 5 pounds (2.3 kg) more than those who had their breakfast on daily basis.

“What we found in the study was that kids who eat breakfast frequently, and especially every day, they’re healthier overall in terms of their lifestyle. They’re much more physically active and they have a better diet overall. So they have lower fat intake, lower cholesterol intake, higher fiber intake,” Mark Pereira of the University Of Minnesota School Of Public Health, leader of the study said.

Pereira explained the findings by saying that breakfast eaters might control their appetite better throughout the day. Further, breakfast might also prevent food binges at lunch or dinner time.

To conclude, the researchers have said that teens have the wrong idea of losing weight by skipping breakfast. Teens could get exposed to a number of health problems, besides being exposed to a higher risk of weight gain.

According to previous research, 12 to 34 percent of children and teens aged 6 to 19 regularly skip breakfast.