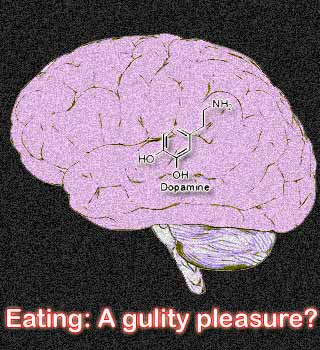 Do you notice that some people stay slim no matter how much they binge while a few others put on loads even after a short eating spree? It now appears that fat people may not be entirely blamed for their weight. Pleasures of eating determined by a chemical in the brain could just be the criminal.

Conducted by researchers at the University of Texas, Austin, a new study shows that the difference between the way an individual’s brains measure the pleasure of eating calls the shot for how much of that food we consume. While few foods like chocolate milkshake stir the brain cells, fatty or sugary food could be less satisfying for fat people as against their thinner counterparts. Hence they end up overeating to make up for the relative lack of enjoyment.

Dr Eric Stice of the University of Oregon in Eugene, remarked, “Although recent findings suggested that obese individuals may experience less pleasure when eating, and therefore eat more to compensate, this is the first prospective evidence for this relationship.”

Under the scanner was a group of female individuals segregated in two lots. While one group consisted of 43 female students aged between 18 and 22, the other group had 33 adolescent girls aged between 14 and 18. The Scientists monitored the brain activity in both these groups. They used a scanner that measured the amount of activity in the pleasure centre of the brain along with a genetic test pinned down an individual’s genetic makeup. This helped the scientists to even predict which of the women would put on weight during the next year.

For the genetic tests, the scientists kept a count of the dopamine receptors in the brain’s pleasure centre. The test was for a gene variant named Taq1A1 linked with a lower number of dopamine receptors in the brain. A close examination of the test results of these women revealed that there was a significant difference in the way thin and overweight individuals retorted to a tasteless drink in comparison to a chocolate milkshake.

Those who were carriers of the genes that had fewer dopamine receptors ate more to enjoy and derive more pleasure from their food when compared to those women who were born with more dopamine receptors. Additionally a follow-up of one year and the researchers found that those with fewer receptors had higher chances of gaining weight. So greater was the flow of dopamine the more satisfied and rewarded we feel. Thus when we binge on a particular food we are in fact simply trying to satisfy our cravings for that food by getting more pleasure and hence consuming it more than a tasteless type of food.

The study is in tandem with previous works that suggest dopamine to be a key factor in nailing down how fat or thin someone is likely to stay.

The study is published in the journal Science.