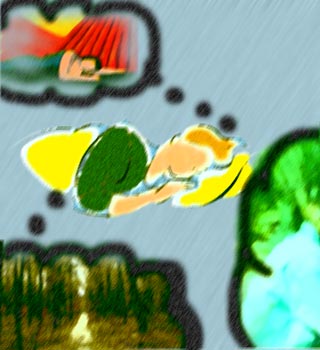 The other gender which is otherwise quite infamous for giving nightmares and sleepless nights to you could actually be suffering from the symptoms themselves. A novel study suggests that women experience far scarier nightmares than men in addition to more bitter and emotional dreams which could leave a far greater impression on them when they are awake.

“We found that women reported significantly more nightmares than men. Women who are premenstrual tend to dream more aggressively, and they are also more likely to remember the dreams”, commented, Dr Jennie Parker, author of the study.

Conducted at the British University of the West of England, the study reveals that women have a run up against far more frightening nightmares than men on account of changes in their body temperatures. The study is based on the findings of a research on 170 volunteers. Distinct types of nightmares were broadly categorized as part of th4e study. It included being chased or hunted; loss of a parent, child or partner along with weird and new environments.

Analysis of the participants showed that only 19% of men reported to having a nightmare in comparison to 30% of women. Adding to women’s woes the researchers also discovered that women experience more emotional dreams which leave a far greater impact when they wake up.

Well, a bone of contention for experts is however that a woman may actually not have more nightmares but could simply be better at remembering and talking about it.