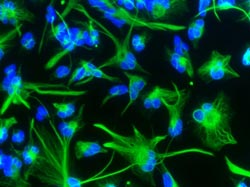 Canadian scientists researching the root causes behind colon cancer have revealed that a few bad stem cells may be responsible for most cancers, thereby indicating hope for better cancer treatments in the next decade.

Till now, there has been a common belief amongst most that every cell in a tumor caused cancer.

However a study led by Princess Margaret Hospital researcher John Dick, published on Monday in the online edition of the scientific journal Nature, supported a theory that “cancer stem cells” may be the source of cancers.

Dick’s team in Toronto found “strong evidence” that only a small proportion of cells drive the formation of tumors associated with colon cancer, he said in a statement.

Abnormal stem cells have also been identified as the source of the disease in certain types of leukemia, as well as breast and brain tumors.

According to Dick, the findings may lead to better cancer treatments that target the stem cells.

“You can keep cutting the leaves off the weed, but the weed will re-grow,” he explained. “But if you cut the tap roots, the leaves will wither away. Killing the cancer stem cells is the equivalent of killing the root of the weed.”

Scientists at Princess Margaret Hospital in this study divided colon cancer samples into two batches, some with stem cells, some without, and injected them into mice, but found tumors only grew in the group void of stem cells.

“We found that not every tumour cell is equally capable of sustaining tumours in the colon,” Dick said. “Colon cancer stem cells are the driving force initiating and sustaining these tumours.”

“Since this is the heart of the tumour, you have to find and kill each of these colon cancer stem cells to truly cure the disease,” he said.
Only one in 57,000 colon tumour cells is a cancer stem cell, he added.

Stem cells are precursor cells that give rise to other types of cells.

Some parts of the body most vulnerable to cancer, such as the colon and skin, are areas where stem cells are highly active, for example, in the skin’s shedding and regeneration.

Colon cancer is a leading cause of cancer deaths in the world, killing almost half of those afflicted, including one in 31 Canadian women and one in 28 Canadian men, according to the Canadian Cancer Society.

It often develops over a long period of time without any signs or symptoms until the cancer has progressed.