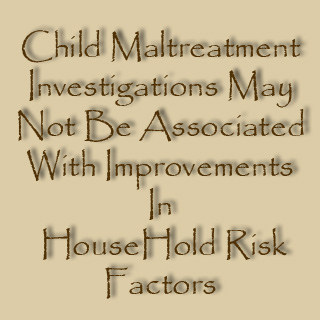 Over the past years, Child Protective Services (CPS) investigation probably signals a household at risk. It seems that households are at great risk for family violence and parental dysfunction, child medical and behavioral problems, and for future incidents of maltreatment. A recent study suggests that household investigations for suspected child maltreatment are not linked with improvements in general, modifiable risk factors such as social support, family functioning, poverty and others.

Throughout the study data from Longitudinal Studies of Child Abuse and Neglect was assessed by the authors. 595 children aged between 4 to 8 years were examined to find out if a CPS investigation for suspected child maltreatment is related with consequent improvements in household, caregiver and child risk factors. Interviews were held with the maternal caregiver of children when the kid was 4 years old and again at the age of 8. From the total of all children, 164 representing 27.6 percent went through a CPS investigation between both the interviews.

Investigated children had maternal caregivers who were older, appeared less educated and had more depressive symptoms than caregivers of kids in the comparison group. Those investigated probably had greater chances of being white and with a past of CPS investigation. Interviews conducted at age 8 claimed that a CPS investigation is correlated with increased levels of poverty, maternal depressive symptoms and child behavior problems.

The study is published in the October issue of Archives of Pediatrics and Adolescent Medicine, one of the JAMA/Archives journals.