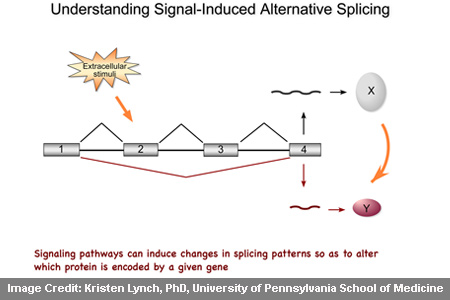 The immune cell protein CD45 seems to be vital for activating the immune system while dealing with pathogens. Investigators from the University of Pennsylvania School of Medicine have apparently found the way different forms of CD45 are controlled in the arc of a body’s immune response. The findings can probably provide a detailed insight of autoimmune and neurological diseases.

When CD45 shifts between its different forms, the protein possibly aids T cells to function properly and also restricts hyperactivity, wherein the body’s own immune system attacks itself. The alternative splicing process apparently enables a single gene to code for multiple variations of one type of protein. While analyzing this process, researchers laid hands on a probable unique paradigm regulating it. Claimed to be found on the surface of T cells, CD45 is crucial for immunity. In the absence of this receptor protein, severe combined immune deficiency (SCID) commonly termed as ‘bubble boy’ syndrome is presumably developed.

Kristen W. Lynch, PhD, associate professor of Biochemistry and Biophysics, said, “There is a spectrum of forms that shift toward full length in resting cells and towards the shorter form in activated cells. We knew that a protein called PSF was required for splicing out parts of CD45 RNA to make the different forms.”

It is believed that normal CD45 is in five forms, each with different lengths. Longer forms of CD45 messenger RNA (mRNA) and protein are seemingly more noticeable in resting T cells. But in activated cells, the shorter form of CD45 mRNA may be more commonly found. If the experts are to be believed then, there are some more important components to the system controlling associated levels of the five forms of CD45 mRNA. In the course of the research, investigators discovered another molecule glycogen synthase kinase 3 (GSK3) in resting T cells. So an additional phosphate molecule is apparently present to polypyrimidine-tract binding protein-associated splicing factor (PSF). The third molecule known as TRAP150 possibly secludes the phosphorylated PSF in a large protein complex.

Once PSF remains in this complex, longer forms of CD45 supposedly predominate and the T cell readily responds to foreign invaders. On achieving the response, PSF may lose its phosphates and is released from TRAP150. PSF then seems to be free to develop in the shortened forms of CD45 mRNA that help return the immune response to a resting state. In CD45 mRNA splicing, recognition by PSF of a short length of RNA sequence called the exonic splicing silencer (ESS) probably occurs.

Certain variations taking place within the ESS sequence are presumably linked with autoimmune disease, especially multiple sclerosis. Investigators assume that other spliced genes in T cells follow similar path as that of CD45. A critical element in T cell activation, GSK3, seems to aid other cell types and signaling pathways. It has already been associated with the development of tauopathies, a group of neuronal diseases like Alzheimer’s disease and Parkinson’s disease. Analyzing the functions of GSK3 can help treat such ailments in the near future.

The research is published in the October issue of Molecular Cell.