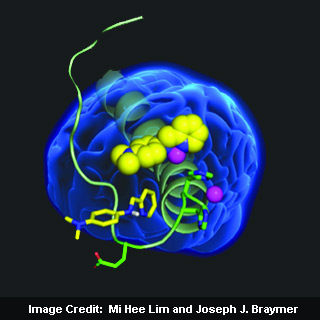 Alzheimer’s disease may now be treated, thanks to this tidbit. Apparently, the aggregation of protein-like bits known as amyloid-beta peptides into clumps in the brain, called plaques is the key to Alzheimer’s. Investigators from the University of Michigan have developed new molecular tools that cleanse the brain of amyloid plaques, witnessed in Alzheimer’s disease.

Plaques and their intermediate messes possibly trigger cell death, further paving way for the disease’s devastating symptoms such as memory loss and other mental difficulties. It is assumed that copper and zinc ions are behind the formation of misfolded proteins and their correlations with Alzheimer’s disease. Scientists tested a particular compound in homogenized brain tissue samples from Alzheimer’s disease patients.

Mi Hee Lim, assistant professor and lead researcher, and colleagues note that the compound disassembles the misfolded amyloid clumps to form smaller amyloid pieces. These may be ‘cleansed’ from the brain more easily by the compound therefore, it has a therapeutic value. Preliminary tests point out that the bi-functional small molecules appear with a strong potential to cross the blood-brain barrier. It is known the blood-brain barrier separates brain tissue from circulating blood, guarding the brain from harmful substances in the bloodstream. For any treatment to be successful, the therapy has to probably be able to cross this barrier.

The research was published online on December 3 in the Proceedings of the National Academy of Science.