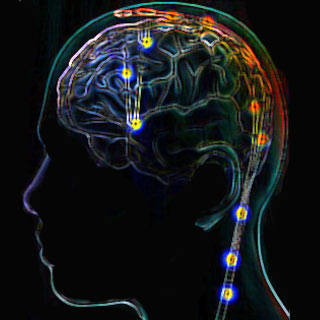 Novel therapeutic tests were believed to be in progress at various health centers all over the world in order to study the efficiency of deep brain stimulation in severe depression, obsessive-compulsive disorder and Tourette’s syndrome. Atleast this is what the experts from the Mayo Clinic Department believe.

Apparently the study states that this treatment may perhaps have the potential ability to reduce the impact of mental illness on the patients, along with their families and society. It was believed that, in contrast to the electroshock therapy (ECT) which possibly arouses the complete brain; deep brain stimulation (DBS) may stimulate only specific parts of the brain. Although the function of the DBS is noted to be equal to producing a lesion on the brain, it may have an additional benefit of being flexible and reversible.

Study authors have stated that, “Deep brain stimulation has long been seen as valuable for controlling movement disorders. It is now being investigated for hard-to-treat psychiatric disorders.”

Study co-author, Kendall Lee, M.D., Ph.D., from Mayo Clinic Department of Neurosurgery was believed to have said that the DBS may be similar to the implantation of a pacemaker for the brain. Apparently, it was noted that during a DBS surgery the patient may be wide awake while the neurosurgeon implants the electrodes in them. It was also noted that during such a surgery, the patients may be capable of giving an instant feedback. Since the brain is believed to be devoid of pain receptors, the patients were stated to not experience any pain sensation during the implantation surgery.

According to the study, in the developed nations, people suffering from long-time disability and untimely death may be undergoing major depression, which is believed to be preceded by heart-related diseases. Major depression is also noted to be a constant and relapsing illness and it seems to be one of the most hindering medical diseases.

It has been estimated that in Americans between the age-group of 15 to 44 years, depression may possibly be the most disabling illness. It was believed that the frequency of major depression may roughly be about 17 percent, thereby affecting nearly 1 in 5 people.

The non-surgical therapeutic treatments like medicines and psychiatric therapy may successfully treat most of the patients with major depression. However, nearly 20 percent of these patients may not successfully react to these treatments.

Dr. Lee also explains that, “DBS is not a miracle cure and should not be used to treat all depression. It should be reserved for those patients who have treatment-resistant depression and approved by a multi-disciplinary team.”

Apparently, the current progress in DBS technologies represents a significant new field which may possibly progress into a deeper understanding of psychiatric neurobiology.

This study has been published in Mayo Clinic Proceedings.