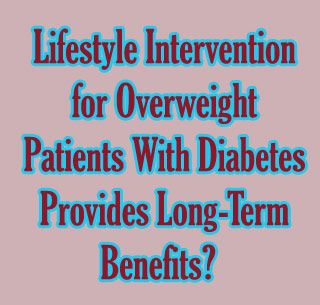 Individuals with diabetes may often be recommended several alterations in their lifestyle. A recent study suggests that an intensive lifestyle intervention aids type 2 diabetes patients to lose weight, enhance fitness, keep blood glucose levels in control and minimize chances of developing cardiovascular diseases. It was mentioned that improvement in blood glucose control and cardiovascular risk factors in patients with type 2 diabetes is crucial for avoiding long-term complications of the disease.

Such parameters are possibly screened and pharmacologically managed by the authors. It was suggested that lifestyle-based weight loss interventions can also be adopted to improve glycemic control and risk factors, but available data proving this is probably inadequate. A multicenter randomized clinical trial was triggered by the Look AHEAD (Action for Health in Diabetes) Research Group. The trial aimed to compare effects of an intensive lifestyle intervention to diabetes support and education. A total of 5,145 overweight or obese individuals were included in the study. These volunteers were suffering from type 2 diabetes and had an average age of 58.7 years

Authors comment, “Although the differences between the two groups were greatest initially and decreased over time for several measures, the differences between the groups averaged across the four years were substantial and indicate that the intensive lifestyle intervention group spent a considerable time at lower cardiovascular disease risk. The critical question is whether the differences between groups in risk factors will translate into differences in the development of cardiovascular disease. These results will not be available for several additional years. However, effects of the magnitude that we observed for fitness, HDL-C and hemoglobin A1c levels and blood pressure have been associated with decreased cardiovascular events and mortality in previous medication trials and observational studies. Moreover, there may be long-term beneficial effects from the four-year period in which intensive lifestyle intervention participants have been exposed to lower cardiovascular disease risk factors, as seen in other clinical trials.”

2,570 participants were subjected to lifestyle intervention wherein a combination of diet modification and physical activity was designed to induce a 7 percent weight loss in the first year and maintain it in subsequent years. For four years these participants were observed and contacted by phone on a monthly basis. The remaining 2,575 individuals were encompassed in diabetes support and education group. These study subjects were made to attend three group sessions annually. Each of these sessions concentrated on diet, physical activity and social support. It was noted that on an average basis, 6.2 percent individuals in the lifestyle intervention group and 0.9 percent of those in the diabetes support group lost a larger percentage of their weight.

The study is published in the September 27 issue of Archives of Internal Medicine, one of the JAMA/Archives journals.

Study sheds light on parental misperception of the accurate weight of...