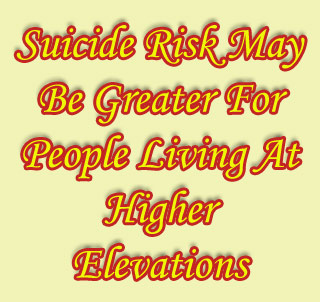 The risk of committing suicide may depend on the region a person lives. A recent study asserts that individuals residing at higher altitudes face greater risk for suicide. It was mentioned that higher altitudes possibly result in lower overall mortality rate.

In order to conduct the study, investigators thoroughly examined the cause-of-death data achieved from all 2,584 U.S. counties between 1979 and 1998. As a group, people living at higher elevations apparently had a statistically significant higher rate of suicide. On completion of the study, scientists highlighted the seeming link between altitude of residence and suicide rate.

The positive association between elevation and suicide risk appeared even after controlling known suicide risk factors, like older age, male sex, white race, and low income. Barry Brenner, MD, PhD, and colleagues predict that the raised suicide rates at higher altitudes are not part of a broader relation between mortality from all causes and living at higher elevations. A significantly lower overall mortality rate at higher altitudes was reportedly pointed out.

The study is published online in High Altitude Medicine and Biology.