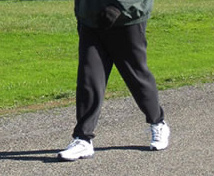 A new study by scientists in the US has revealed that the speed of walking may indicate how long an elderly person will survive.

Researchers at the University of Pittsburgh analyzed data of 492 adults aged 65 and older for a decade and found that faster walkers are substantially more likely to outlive the slower ones.

The study adjusted for gender, race, age, chronic illness and hospitalization. They found that walking speed appeared to be an independent predictor of longevity.

While fastest walkers had covered the equivalent of 2.5 mph on a treadmill, slowest walkers were able to walk less than 1.5 mph.

Walking speed can mirror the health of many body parts like heart, lungs, limbs, and the circulatory system, the scientists said.