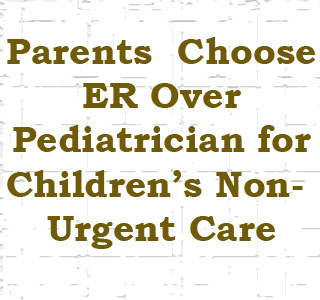 Emergency rooms (ER) were once believed to be overcrowded due to uninsured patients looking for health care. A recent Columbia research claims parents of insured children choose ER for non-urgent care instead of taking them to their pediatricians. However, ER overcrowding can be significantly reduced by ascertaining the barriers of primary care providers.

The investigators analyzed the reason parents from the New York city switched and employed a pediatric ER between 1997 and 2006. The experts explain that in 1997, around 60 percent of parents brought their children to the ER which seemingly required normal primary care. But parents assumed their child to be in need of urgent care. Twenty percent reported visiting their child’s usual doctor with 5 percent of the children being uninsured.

“Access to health care is more than having insurance and a health care provider. The question is do you have access to that care? All the parents in our research were in the ER during normal office hours and should have been able to see their own providers for non-urgent problems,” highlighted Melissa Stockwell, MD, MPH, assistant professor of clinical pediatrics and population and family health at Columbia University’s College of Physicians & Surgeons and Mailman School of Public Health and research’s principal investigator.

However, a reversed pattern was observed in 2006. 20 percent brought their child to the ER because of the perceived need and 45 percent alleged limited access to their child’s usual doctor. No alteration was registered in the percent of uninsured children. Parents may prefer ER because of an elevation in the number of children insured by SCHIP during the decade.

Dr. Stockwell alleged, “Pediatricians may unwittingly send a message that the ER is the place to take a sick child if they tell parents to go there if they are worried. And ER physicians may not always tell parents that the non-urgent care they seek may be better addressed by their primary care provider who knows their child’s medical history. Both providers are probably reinforcing parents’ use of the ER for non-urgent care.”

Dr. Stockwell commented, “The primary provider has more knowledge about the patient than the ER does, and we think maintaining that continuity of care is simply better health care.”

The research was published in the March issue of Pediatric Emergency Care.