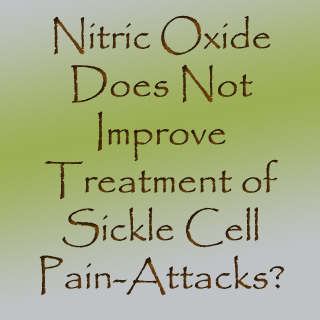 Vaso-occlusive crisis (VOC) appears common among sickle cell disease (SCD) patients. A groundbreaking study now claims that patients with SCD and VOC in the hospital do not benefit from inhalation of nitric oxide gas. The study findings apparently have great importance in the medical domain.

Experts initiated a phase 2, randomized, placebo-controlled, multicenter study that took place at 11 centers between October 2004 and December 2008. The study encompassed 150 SCD patients with VOC who were randomized to receive up to 72 hours of inhaled nitric oxide gas or nitrogen placebo. Among the participants, the primary outcome was the time to resolution of a painful crisis, defined by freedom from parenteral opioid use for 5 hours. Pain relief was seemingly examined by some scores on a visual analog pain scale (VAS), ability to walk and the patient’s as well as family’s decision, along with physician consensus.

Investigators explain, “In summary, the results of this study indicate that inhaled nitric oxide in the doses and methods of administration used in this study does not reduce VOC severity in SCD. These results underscore the need for new agents and a sustained clinical trials apparatus for studying VOC, with sufficient numbers of patients to provide adequate power to rapidly test promising therapeutics in patients with SCD.”

Mark T. Gladwin, M.D., of the University of Pittsburgh, and colleagues observed that time to VOC resolution does not differ strongly on the basis of treatment. The estimated median time to resolution of crisis possibly was 73 hours for the inhaled nitric oxide group and 65.5 hours in the placebo group. The median length of hospitalization among patients who inhaled nitric oxide reportedly was 4.1 days and 3.1 days for the placebo group. Average VAS scores at 24 hours and median total opioid use apparently remained almost the same in both the groups.

The study was published in the March 2 issue of JAMA.