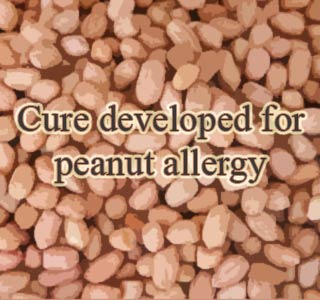 There are many people, especially children who suffer from peanut allergies. This makes their life a little harder, as compared to the relatively carefree life of other children. These selected few children suffering from peanut allergies have to be careful of what they eat in restaurants, birthday parties, etc. However, a latest study has found the first successful treatment for severe peanut allergy. This study was conducted by the Wellcome Trust Clinical Research Facility in Cambridge.

Earlier attempts to reduce peanut sensitivity in children using peanut injections had resulted in grave side effects. In the present study, Addenbrooke’s Hospital, Cambridge researchers gave four children an increasing daily dose of peanut flour in order to build their tolerance level against peanuts. After a period of six months, it was noticed that these children could eat an equivalent amount of ten peanuts. Prior to this experiment, consumption of even one peanut could lead to a potentially fatal anaphylactic shock.

It is said that peanut allergies affect around 1 in every 50 child in the U.K. This type of allergy has very less chances of improving or curing. Dr. Andy Clark, who led the research, says that, “Every time people with a peanut allergy eat something, they’re frightened that it might kill them. Our motivation was to find a treatment that would give them the confidence to eat what they like.”

For the purpose of the study, the researchers fed these allergic children small five milligram peanut flour dosage. This was done with the aim of building their tolerance level to such an extent that they could safely consume small amounts of whole peanuts without experiencing any allergic reaction. Dr. Clark says that, “We’ve got them to a point where they can safely eat at least ten whole peanuts. It’s not a permanent cure, but as long as they go on taking a daily dose they should maintain their tolerance.”

The researchers say that these children are now on a special peanut diet where they have to consume about 5 peanuts regularly. It is said that more children are also going to be a part of this program. The researchers hope to soon use this innovative approach on adults suffering from peanut allergies, as well. Having said this, they also say that a more detailed analysis needs to be conducted before these findings can actually be put to use.