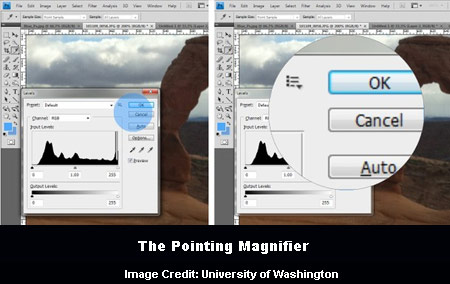 Making lives of people with disabilities simpler seems to have taken the center stage in the health domain. Just a few days ago we penned down an investigation wherein BYU engineering students had rolled out a novel eye-tracking tablet for disable people. And now, scientists from the University of Washington have unleashed unique software that makes computer mouse easier for those with disabilities.

The team of investigators invented two mouse cursors that make clicking targets not at all troublesome. The software which can be downloaded for free does not require additional computer hardware. The Pointing Magnifier apparently combines an area cursor with visual and motor magnification. As a result, the need for fine, precise pointing seemingly diminishes. Reportedly, those employing the Pointing Magnifier can much more easily acquire targets even the small ones. It runs on Windows-based computer systems and replaces the conventional cursor with a larger, circular cursor that can be made even larger for users who have less motor control.

In order to attain a target, users have to place the large cursor somewhere over the target, and click The Pointing Magnifier. It may now magnify under that circular area until it fills the screen, making even tiny targets large. Then users have to click with a point cursor inside that magnified area, acquiring the target. Even though the Pointing Magnifier requires two clicks, it appears much simpler to use than a conventional mouse, which can require many clicks to connect with a target.

“Pointing is an essential part of using a computer, but it can be quite difficult and time consuming if dexterity is a problem. Even shaving one second off each time a person points may save hours over the course of a year,” said Jacob O. Wobbrock, an assistant professor in the Information School who leads the AIM Group.

The latest offering supposedly enlarges both visual and motor space. Its software comes with a control panel that enables users to adjust color, transparency level, magnification factor and area cursor size. User preferences are possibly saved once the application is closed. Keyboard shortcuts may enable or disable the Pointing Magnifier. When the Angle Mouse cursor initially blasts towards a target, the spread of movement angles, even for people with motor impairments, seemingly tends to be narrow, so the Angle Mouse keeps the cursor moving fast.

“Our cursors make ubiquitous mice, touchpads, and trackballs more effective for people with motor impairments without requiring new, custom hardware,” Wobbrock said. “We’re achieving accessibility by improving devices that computer users already have. Making computers friendlier for everyone is the whole point of our work.”

When the cursor nears its target and the user tries to land, the angles formed by movements purportedly diverge sharply, so the Angle Mouse slows the cursor, enlarges motor space and makes the target easier to get into. Experts also conducted a study in which 16 people, half of whom had motor impairments were evaluated. The Angle Mouse allegedly enhanced motor-impaired pointing performance by 10 percent over the regular Windows default mouse and 11 percent over sticky icons.

The Pointing Magnifier work was funded by the National Science Foundation and the Natural Sciences and Engineering Research Council of Canada.