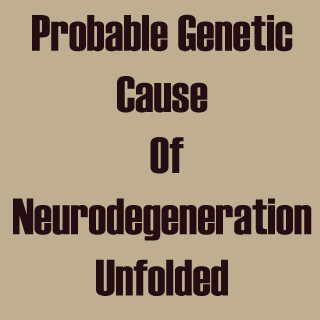 Neuro – degeneration seems to be a comprehensive term for disorders related to the progressive loss of structure or function of neurons, such as dementia. A recent investigation conducted by the Mayo Clinic has laid hands on two mutations that are responsible for a devastating neurological condition. The research has apparently shed light on a novel neural pathway that can assist in understanding a number of similar conditions.

It is called as hereditary sensory and autonomic neuropathy type 1 (HSAN1) with dementia and hearing loss. The symptoms probably rise in the young adult years, i.e., 20 to 35 years. After the symptoms appear, individual’s cognitive ability, hearing and ability to sense limbs may deteriorate slowly. In an attempt to treat this ailment, scientists analyzed DNA samples and data from three other family groups from the United States, Japan, the United Kingdom (U.K.) and Australia. Investigators undertook NextGen sequencing, subsequent bioinformatics studies as well as methylation studies.

“We were able to do this now because of Next Generation genomic sequencing technology. We also had the invaluable help of our international collaborators who helped identify additional extended families with this condition, making the extensive genetic data available to us,” explained Christopher Klein, M.D., Mayo Clinic neurologist and lead author of the study.

On completion of the investigation, scientists registered mutations on the DNMT1 area that lead to misfolding of the enzyme, decreased enzyme activity and loss of chromatin binding. Even moderate alterations in methylation were shown to seemingly disrupt normal neural functions. It was mentioned that DNMT1 appears as a part of a precise mechanism of dynamic regulation of the nervous system. Since the condition worsens with age, its effect is apparently cumulative and epigenetic. Even though, the findings offer no immediate treatment for disorders related to the mind, the discovery possibly has great significance in understanding the disease functions, and directions for future research in neurodegeneration.