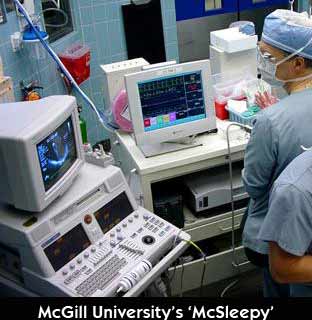 McSleepy is the latest completely automated anesthesia system developed by researchers at McGill University Health Centre (MUHC). This new, one-of-its-kind system performs the functions of the administration of drugs of general anesthesia and monitoring their effects automatically.

The new system needs no manual intervention and has been already used on a patient who was operated upon to remove a cancerous tumor from the kidney (nephrectomy) for over a period of 3 hours 30 minutes. “We have been working on closed-loop systems, where drugs are administered, their effects continuously monitored, and the doses are adjusted accordingly, for the last 5 years,” said Dr. Thomas M. Hemmerling of McGill’s Department of Anesthesia and the Montreal General Hospital, the head of ITAG (Intelligent Technology in Anesthesia research group) and the team of anesthesiologists, biomedical scientists and engineers. “Think of “McSleepy” as a sort of humanoid anesthesiologist that thinks like an anesthesiologist, analyses biological information and constantly adapts its own behavior, even recognizing monitoring malfunction,” he said.

To make it work, McSleepy has to be installed on a laptop computer. It then calculates the appropriate dosages of the general anesthesia to be given to the patient and administers the drugs through the conventional infusion pumps, after manipulating them according to the patients need. McSleepy is faster and more accurate than a human and assists anesthesiologists like an automatic transmission assists people in driving.

One additional feature of McSleepy is that it can be installed on PDAs as well facilitating distant monitoring and controlling the drugs possible. Also it can be involved in medical teaching programs.

“It will probably take two years to perfect the system,” Dr. Hemmerling said. “Many people are reluctant to rely on automated systems, especially when they are not visible – it is not clear what they are actually doing or how – , the fear of a ‘black box’ which suddenly takes over. In designing ‘McSleepy’, we put in considerable research on the design of an interface which is clear, easy to read, resembles displays of our everyday practice but still provides a detailed clinical picture of what is going on and what has happened”.

Anesthesia care is determined through parameters of biological and pharmacological nature which need to be constantly monitored, recorded and analysed. This is what will affect the accuracy of the system which will need to be perfected over time although it is more efficient than what a human is and there is hope expressed by Dr. Hemmerling that the automatic system will be made commercially viable in the next 5 years.