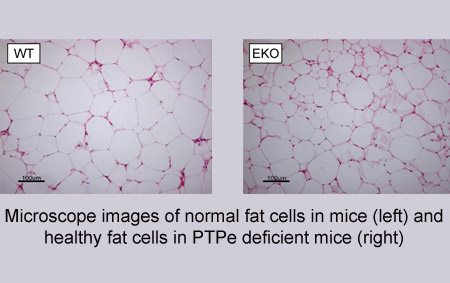 Here is another piece of information that may assist in tackling the ever-growing epidemic, obesity. Weizmann Institute scientists have discovered that the protein tyrosine phosphatase epsilon (PTPe) is active in a small part of the brain and contributes to weight gain. The research findings probably have profound implications in the medical section.

At the time of the research, female mice were genetically engineered to lack the protein PTPe. On removing the ovaries mice may typically gain weight to the point of obesity. However, this didn’t take place and the genetically-engineered mice reportedly remained stable. These mice were on a high-fat diet and yet those lacking the protein apparently remained slim and healthy. Investigators then examined the hypothalamus, a region of the brain that takes in assorted stimuli and plays a pivotal role in regulating body mass.

It was affirmed that PTPe blocks the messages from a hormone called leptin that is a hallmark in body mass regulation. The protein probably responds to the leptin signal in the hypothalamus, inhibiting certain molecules, which in turn dampens that signal. In its actions, leptin presumably decreases appetite while increasing physical activity. Prof. Ari Elson and colleagues found that mice lacking the protein were highly sensitive to leptin. This sensitivity apparently remained despite aging and ovary removal or high-fat diets. So in obese humans with leptin insensitivity, inhibiting PTPe can possibly help to reestablish the leptin response and induce weight loss.

The research is published in the journal Cell Metabolism.