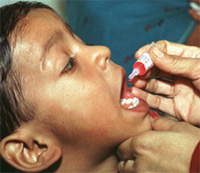 The prestigious Jimmy and Rosalynn Carter Partnership Award has been conferred upon the Aligarh Muslim University (AMU) in recognition of its community service and polio-eradication programme.

This is the first time that this award has been given to a non-American University.

The Jimmy and Rosalynn Carter Foundation recognises ”the innovative ideas of the AMU for campus-community collaboration that makes a difference to the lives of others and enhances learning,” said the citation.

During the last four years, under the leadership of the Vice-Chancellor, Mr Ahmad, the AMU has taken the lead in organising polio sensitisation programmes, immunisation camps and door-to-door vaccinations.

Thirty such programmes in five districts have been organised with the help of UNICEF and Rotary International.

Large numbers of AMU students have participated in these programmes.