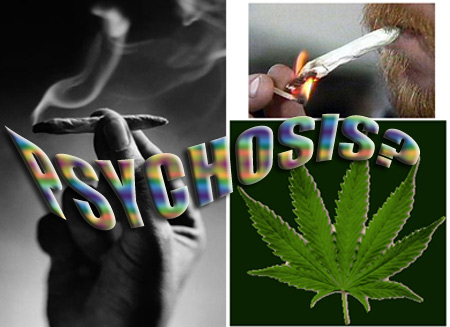 Is it all in the mind when it comes to smoking Cannabis, most commonly reffered to as ‘pot’? The widest-yet investigation into cannabis and mental health says individuals who use marijuana increase their risk of developing a psychotic illness by more than 40 percent.

Doctors are warning young people about the risk to their mind from a drug that many today may dismiss as harmless and recreational.

Their conclusions are founded on a review of 35 published studies that explored the frequency of schizophrenia, delusions, hallucinations, thought disorder and other psychotic illnesses among marijuana users.

Those who had used the drug were 41 percent likelier to experience an episode of this kind than people who never smoked. The risk increased relative to use, it found.

The most frequent users were twice as likely to have these symptoms compared with non-users.

The study also looked at the risk of depression, anxiety and other emotional states, but declared the evidence for any link to cannabis was unclear.

The authors say that, despite their best efforts, they cannot rule out the possibility that their study was affected by “confounding factors” that typically dog research into cannabis.

But the review says the weight of evidence has now come down clearly in favour of warning youngsters, the biggest users of cannabis, that the drug can lead to mental illness.

“Despite the inevitable uncertainty, policymakers need to provide the public with advice about this widely-used drug,” it declares.

“We believe that there is now enough evidence to inform people that using cannabis could increase their risk of developing a psychotic illness later in life.”

It stresses that the risk of schizophrenia and other chronic psychotic disorders, even in people who use cannabis regularly, is statistically low, with a less-than one-in-33 possibility in the course of a lifetime.

Even so, “cannabis use can be expected to have a substantial effect on psychotic disorders at a population level because exposure to this drug is so common,” it argues.

The authors admit, though, that it may be impossible to establish for sure whether cannabis causes psychosis on the basis of current methods.

The big problem for researchers is that cannabis is illegal, which means that the strength and dose of active ingredient varies, in contrast for instance to the well-known dose of nicotine in tobacco, which is legally regulated.

Besides, testing cannabis on the mind would run into huge legal as well as ethical hurdles! Besides, sometimes one can never believe what the media has to say on such controversial issues.