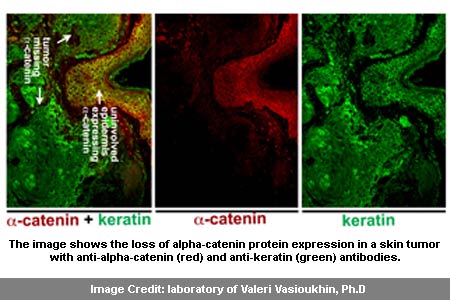 Squamous cell carcinoma probably is the second most common form of skin cancer. Investigators from the Fred Hutchinson Cancer Research Center have caught sight of a novel drug target for this cancer. They believe that the protein alpha-catenin acts as a tumor suppressor and controls cell proliferation.

In this research, mice bred to lack a copy of the gene that makes the protein alpha-catenin in hair follicle stem cells were thoroughly investigated. These mice were found to seemingly develop squamous cell carcinoma. Then experts interfered with the mechanisms by which the protein suppresses tumor growth.

“The fact that alpha-catenin-deficient mice developed skin cancer led us to conclude that the loss of this protein is an important event in cancer development, and that alpha-catenin functions as a tumor suppressor. We also found that unlike normal cells, alpha-catenin-mutant cells cannot stop dividing when they become very crowded in the Petri dish – this characteristic is one of the hallmarks of cancer cells,” said Vasioukhin, an associate member of the Hutchinson Center’s Human Biology Division.

As a result, it appeared that alpha-catenin regulates the activity of a protein called Yap1. In case this protein is activated, it can seemingly lead to cancer. In conclusion, it was affirmed that Yap1 can be an effective target to fight squamous cell carcinoma.

The research was published on May 24 in Science Signaling.