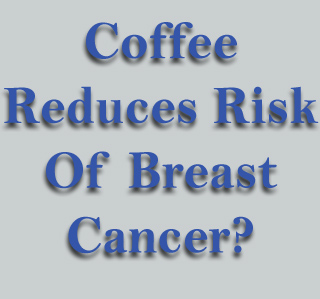 The role of coffee in the development of breast cancer has always been a controversial one. Last year a study mentioned that simply sipping coffee need not raise the risk of breast cancer. A team of scientists from the Karolinska Institutet claims that coffee drinking declines the threat of ER-negative breast cancer in women.

During the study, experts matched several lifestyle factors, with a regular coffee consumption in both women affected by breast cancer and healthy women of similar age. Women who drank the beverage on a daily basis apparently had a lower incidence of breast cancer than those who rarely consumed coffee. Data was gathered after adjusting for factors related to stressors such as menopause, exercise, weight, education and a family history of breast cancer. It was pointed out that coffee’s protective effect against breast cancer can be seen in so-called estrogen receptor (ER)-negative breast cancer.

Jingmei Li, who led the study at the Department of Medical Epidemiology and Biostatistics, and colleagues believe that coffee has a significantly beneficial impact on women. However, about one third of breast cancers are ER-negative, and cancer of this type is very age dependent. Usually these types of cancer appear more aggressive than ER-positive disease.

The study published is in the journal Cancer Research.