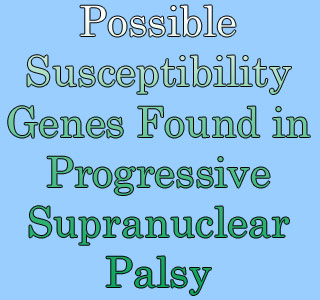 Progressive supranuclear palsy (PSP) is known to be a rare neuro – degenerative disease whose symptoms are identical to those of Parkinson’s disease. Nevertheless, it is seemingly resistant to medications used for the latter. A study co-led by investigators at Mayo Clinic in Florida now reveals the discovery of three potential susceptibility genes for development of PSP.

The findings seem to offer a ‘testable translational hypothesis’ as to the progression and development of PSP. They also appear to provide hints into other common brain disorders that are a result of tau protein accumulation in the brain. Researchers suggest those ‘tauopathies’ to comprise of some type of Parkinson’s disease, frontotemporal dementia, Alzheimer’s disease, and other disorders.

“These are promising gene candidates that may help us understand and potentially treat PSP. While these findings are surprisingly robust, we are still at the very earliest stages of this work. These are excellent candidate genes, but we have to make sure they are true susceptibility genes,” shares neuropathologist Dennis W. Dickson, M.D., a study co-lead author.

Mayo Clinic seemed to play a pivotal role with its collection of brain tissue from PSP patients claimed to be the largest in the world. 600 of the 1,114 PSP DNA samples employed for the initial part of the investigation were contributed by Mayo Clinic. The rest were brought in by other international institutions. The team then performed a genome-wide association study (GWAS) to locate susceptibility genes. For this, SNPs were looked into.

The scientists primarily evaluated the link between genotypes at 531,451 SNPs in the group of 1,114 PSP DNA samples. They also assessed the genotypes in the blood of 3,247 participants control group who did not suffer from PSP. The SNPs ‘hits’ discovered were tested in a second group. This included the blood samples of 1,051 living PSP patients. The blood from a second group of 3,560 control participants was also included. In this phase of the study, blood from approximately 200 PSP patients was contributed by Mayo Clinic in Florida.

The results saw PSP patients with not just variants in their tau gene but also three SNPs which seemed like candidate PSP genes. All three appeared to possess neurological functions. MOBP is said to be a protein linked with myelin while Dr. Dickson suggests the STX6 gene to have been implicated in a range of neurodegenerative diseases, counting Alzheimer’s. As for EIF2AK3, the third gene, it is believed to play a role in the translation of RNA to protein. It also possibly signals cells to stop the production of proteins in the event of abnormal protein accumulation in the cells.

The two control populations also seemed to show variants in these three genes, however they much higher in PSP patients. PSP, it is suggested may hence not be caused by these genes, but they do seem to contribute to an individual’s susceptibility to the disorder.

“We don’t know for sure that these SNPs are precisely at these gene locations,” adds Dr. Dickson. “If they are real PSP susceptibility genes, we can then zero in on variants that have an impact on the disease, which might then be exploited therapeutically.

The investigators further mention that though there may be a long way for any new treatment, the findings should excite scientists committed to comprehending the disorder.

The report was published online June 19 in Nature Genetics.