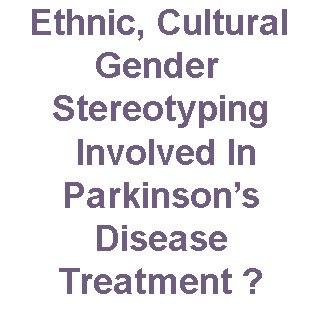 Facial masking is a symptom of Parkinson’s disease where the facial muscles come to a standstill leaving the person’s face expressionless. A study from scientists at Tufts University, Brandeis University and the National Cheng Kung University in Taiwan, has disclosed that clinical conclusions regarding facially masked patients of Parkinson’s disease is apparently perturbed by cultural, ethnic and gender stereotypes.

This leads to seemingly insufficient and incorrect health care for those affected by this condition. The study involved 284 American and Taiwanese healthcare practitioners and 24 American and Taiwanese individuals with Parkinson’s disease. The interviews of participants were videotaped and the doctor’s response to these recordings was being observed.

“Practitioners need to better understand the complexities of this disease, and ensure that their own personal cultural biases do not impact their treatment of patients,” remarked lead author Linda Tickle-Degnen, Ph.D., chair of the Department of Occupational Therapy in the Graduate School of Arts and Sciences at Tufts.

The patients exhibited varied degrees of facial masking. Analysts based their judgment on 4 psychological features namely sociability, cognitive competence, depression and social supportiveness. The study revealed that though practitioners had neurological expertise, they were presumably biased when it came to dealing with persons having a higher degree of facial masking. Also, the bias appeared to be more prominent when the aforesaid masking accompanied cultural, ethnic and gender preferences. Scientists suggest that professionals ought to leave their dependence on unresponsive faces and take the aid of family members or other clues for the treatment.

The investigators wished to study Taiwanese and the American cultures since their views of social life were supposedly different. East Indians are apparently less talkative and socially active whereas the American culture seems to be more enthusiastic and extrovert. Patients with higher masking were considered to be sadder and less active. However, the same cases seem to be judged as per the ethnicity and gender of patients too.

American professionals were reportedly biased negatively than the Taiwanese counterparts. On the contrary, practitioners were seemingly biased while passing conclusions on cognitive competence and social supportiveness of the Taiwanese patients. Taiwanese practitioners showed negative biases of patient cognitive competence than the American professionals. Gender stereotypes also contributed to the practitioners’ judgment. The effect of facial masking was more prominent in response to women, specifically Americans, when compared to men in both countries.

The study is published in the July issue of the journal of Social Science & Medicine.

Seasonal allergies good for the body?