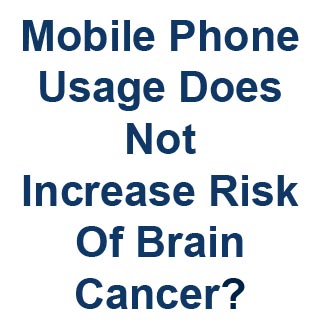 Doting parents of young children can heave a sigh of relief if the following tidbit is to be believed. A study conducted by a team of scientists at the Swiss Tropical and Public Health Institute in Basel, Switzerland, has unfolded that statistically children and young teens who make use of mobile phones are not more prone to brain cancer than those who do not use such gadgets.

The investigators observed the medical records of children in the age-group 7 to 19 with brain tumors, from population registers. Interviews were also conducted where participants were questioned concerning their mobile phone usage. They also referred to information from network operators. The study that took place between the years 2004 to 2008 was inclusive of people who enrolled from Norway, Denmark, Sweden and Switzerland. The analysts examined data for 352 patients affected by brain cancer while 646 of them were in the control group.

Reportedly, patients with brain tumor did not face more risk than the control set. Almost 75.3% of the case group and 72.1% of the control clan apparently made use of a mobile handset for more than 20 times before the period of diagnosis. Moreover, 194 case patients and 329 control subjects seemingly made use of the mobile phone regularly. For a specific set of persons where operator data was available, brain tumor chances were linked to the elapsed time from the time mobile subscription started off. Supposedly, certain areas of the brain that were highly exposed to the electromagnetic waves, did not encounter any risk of tumor.

“Because we did not find a clear exposure-response relationship in most of these analyses, the available evidence does not support a causal association between the use of mobile phones and brain tumors.” Nevertheless, since mobile phone usage among children and adolescents has increased over the years, they encourage a careful watch on the trend,” cited Martin Röösli, Ph.D, of the Swiss Tropical and Public Health Institute in Basel, Switzerland and colleagues.

The authors conclude that the prevalence of brain cancer has apparently not increased since the last 20 years in spite of a healthy rise in cell phone usage. However some precautionary measures like avoiding keeping the phone close to the ear or using a speaker or an ear piece are also considered.

The study is published in the July 27 issue of the Journal of The National Cancer Institute.