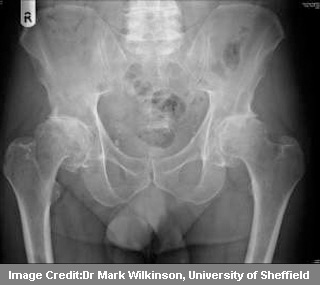 After a medical research claimed that it could regenerate damaged cartilage tissue in osteoarthritis, a few months back, there’s something new coming from this front. Wellcome Trust scientists have seemingly unfolded the third gene linked to osteoarthritis.

The gene MCF2L comprises the disease-linked variant that was uncovered by the investigators by using information from the 1000 Genomes Project. It analyzed the genomes of 3,177 individuals suffering from osteoarthritis and compared it to 4,894 people from the normal population that came up to nearly 6000 variants. At this preliminary stage, no new genes came to light, but this analysis scanned almost 7.2 million variants. They supposedly found the relation between MCF2L and osteoarthritis with no need for further patterning.

“By using the 1000 Genomes Project data to add value to our original genome-wide association scan for osteoarthritis, we have uncovered a disease-associated gene that had previously remained hidden. We were able to analyse our results in greater detail and zoom in on variants that we hadn’t been able to identify before. We hope that this approach and our findings will help to improve our biological understanding of this very painful disease,” commented Dr Eleftheria Zeggini, senior author from the Sanger Institute.

Scientists believe that it is a challenging task to identify the genes of osteoarthritis. By far, just 2 loci namely GDF5 and a signal from a portion on chromosome 7 have apparently been unleashed among European people. The MCF2L gene unraveled in this study is seemingly present on chromosome 13 and seems to control a nerve growth factor (NGF). Apparently, when individuals with osteoarthritis in the knee are administered humanized monoclonal antibody to counter NGF, they seem to experience less pain and show better movement. This brings to fore that the aforesaid gene participates in the development of osteoarthritis and becomes a new objective for future work.

To affirm the gene involvement, the analysts studied 19,041 individuals with arthritis and 25,504 persons devoid of this problem. According to the first author of the study, Aaron Day-Williams the revelation of MCF2L variant implicates a genetic link. It reveals that NGF may play a vital role in knee osteoarthritis than hip. He concludes that this variant has the potent to pave way for further biological procedures at work and targets for therapy.

The findings are based on analysis of the arcOGEN Consortium.