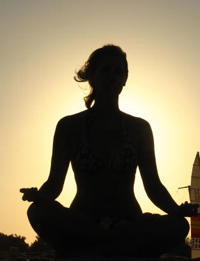 A study conducted by the Central Council for Research in Yoga and Naturopathy (CCRYN) has found that during the conventional treatment regular Yoga practice is beneficial in reducing side effects and toxicity of chemotherapy.

Cancer patients undergoing radiotherapy or chemotherapy have various side effects of the treatment.

The yoga therapy gives physical, functional and psychological benefits to the cancer patients, besides desirable immuno-modulatory effects, the study said.

Patients in stage two and three of breast cancer were randomly divided into yoga and control groups.

Subjects in both the groups were matched for their age (35 to 70 years), stage of disease and received primary treatment as surgery with radiotherapy and chemotherapy as auxiliary treatment.

Baseline assessments were taken prior to surgery and subsequently, during and after radiotherapy and chemotherapy.

Symptom, pain, nausea and emesis and blood draws were assessed for both the groups during treatment intervals for hematology, biochemistry, hormonal and immune assays.

While, the yoga group received integrated approach of yoga therapy (IAYT), the control group was given supportive counselling.

It was observed that the yoga group had increased natural killer cell counts and pain thresholds.