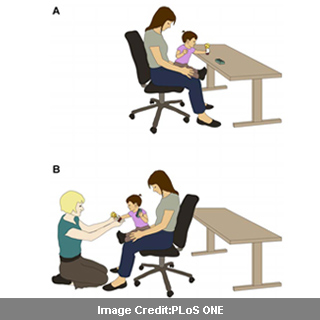 Exploring an infant’s antics makes us realize that the mind starts ticking as soon as we are born. In an interesting study by scientists from the University of Washington, it has been found that babies tend to show some amount of goodness and fairness right from infancy.

In the analysis, the babies seemed to be aware of equal and unequal distribution of food along with the willingness to share a toy. During the trial, a 15 month old baby sat on the parent’s lap and viewed 2 videos that depicted sharing. In this case it was crackers being distributed once equally and once unequally among the recipients.

The second test used a bowl of milk instead of crackers. Later, all the 47 babies who were examined individually watched the food distribution. As per something known as ‘violation of expectancy’, babies are more attentive when they are surprised. They also found that babies apparently observed when 1 person was given more food than the others.

“Our findings show that these norms of fairness and altruism are more rapidly acquired than we thought,” quoted Jessica Sommerville, a UW associate professor of psychology who led the study.

The children expected that there would be equal distribution of food. They were therefore surprised when one recipient got more food than the others. To further comprehend the babies’ willingness to share and altruism, another study was conducted. Two toys namely a LEGO block or a larger LEGO doll was shown to the infants. The one which the babies picked was termed as the baby’s preferred toy.

Furthermore, an unknown person asked for the toy of the children by means of a gesture. The responses showed that almost one third of the infants apparently showed willingness to share their preferred toy. The other children seemingly wished to share the non-preferred toy which the analysts feel could be due to nervousness of gifting a stranger or no motivation to share.

The results imply that even at such an initial stage of life, there are differences in the levels of altruism. The team found that 92% of the babies who shared the preferred toy also seemed to spend more time looking when the food distribution was unequal. On the other hand, around 86% of those who shared their less preferred toy supposedly looked when there was fair distribution of milk.

The former group termed as altruistic sharers were presumably sensitive to the absence of fairness in the task while the latter group called the selfish sharers appeared to show the contradictory effect. The authors conclude that babies pick up these socializing norms through non-verbal cues.

The findings are published in the journal PLoS ONE.