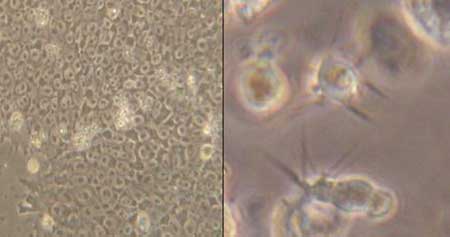 Of the various techniques to treat cancer like chemotherapy and radiation, we have to agree that stem cell therapy holds great prospects. Using a person’s skin as a source of immune cells to strike cancer cells, is exactly what experts at Oxford University have tried their hand at.

Though this technique sounds promising, more theories will be required for its actual implementation. The researchers apparently transformed induced pluripotent stem (iPS) cells into dendritic cells that could be used for clinical trials. They then exposed these cells to components of a melanoma.

“The patient would in effect be treated with their own immune cells to prime an attack on their tumour, but those cells would have been derived from a biopsy of their skin,” cited Dr Paul Fairchild of the Sir William Dunn School of Pathology at Oxford University, who led the work.

The outcomes showed that the dendritic cells laced with components of melanoma seemingly stimulated a thorough immune response to melanoma markers in cultured cells used in the experiment. According to the scientists, many effects of chemotherapy can be surpassed by using the patient’s skin cells for treatment.

The lab-grown cells may be used as a continuous source of immune cells for multiple sessions of cell therapy. Moreover, this research has unfolded a stem cell approach that results in the production of dendritic cells which possibly spur an antibody and a T-cell immune response.

However, the scientists concluded that immune cell therapy of this nature will be subject to use only when other treatments are showing no effect. The analysis is published in the journal, Gene Therapy.