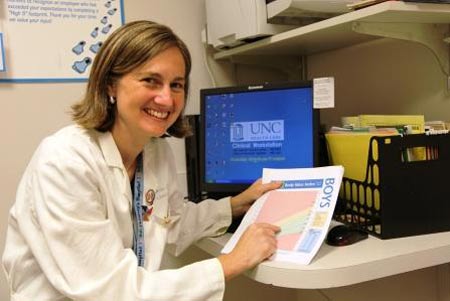 Maintaining optimum weight right from childhood is essential considering the long term effects of obesity. It’s obviously important for physicians to guide parents regarding their child’s obesity, but it apparently has not been happening, as reported by experts from the University of North Carolina at Chapel Hill.

Seemingly, less than about one-quarter of parents of obese kids remembered being told by a physician that their child was overweight. Though this proportion has increased, the team believed that substantial improvements are needed.

Eliana M. Perrin, MD, MPH, associate professor in the University of North Carolina at Chapel Hill School of Medicine, pediatrician at North Carolina Children’s Hospital, and lead author of the study commented, “Parents might be more motivated to follow healthy eating and activity advice if they knew their children were overweight, but very few parents of overweight children say they have ever heard that from their doctor.”

The experts added that doctors have to be wary of the weight of kids and enlighten parents in suitable ways so that they pay attention to it. For the study, information was collected from nearly 4,985 children in the age-group 2 to 15 with BMI at the 85th threshold of height to weight ratio or above it. This investigation is part of the National Health and Nutrition Examination Survey (NHANES) that was conducted from 1999 to 2008.

Out of this group, only 22% parents reported of being notified that their kid was overweight. Nevertheless, this percentage rose to 23.4% in 2004 and reached 29.1% in the period between 2007 and 2008. Even in case of children who were very obese, just 58% of parents appeared to recall a health care professional updating them on this issue.

This analysis essentially sought to establish better communication of obesity status between doctors and parents which could have an impact on the lifestyle opted to combat the situation thereafter. It is published in the journal, Archives of Pediatrics & Adolescent Medicine.