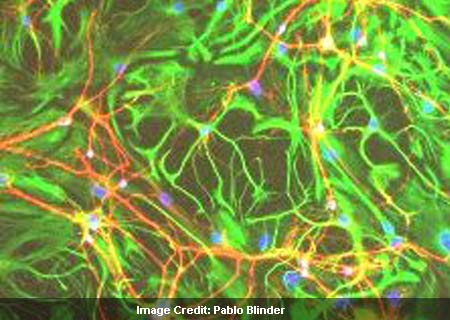 Not many of us may be aware of glia cells in the brain that are responsible for meshing in neurons together, thereby shielding cells in the process. Throwing some light on the mechanism, scientists from the Tel Aviv University assert that glia cells are principal components governing brain plasticity, learning and adaptation processes.

However, professionals have not been very clear on the role played by these cells in regulating thought processes and memory. The team put forth that glia cells do not merely glue neurons together, but regulate many other prime processes involved in the brain.

De Pi Ph.D. student Maurizio De Pittà of TAU’s Schools of Physics and Astronomy and Electrical Engineering, commented, “Glia cells are like the brain’s supervisors. By regulating the synapses, they control the transfer of information between neurons, affecting how the brain processes information and learns.”

In this research, the investigators created a computerized model which integrated the effect of glia cells on data transferred by synapses. This prototype could also be incorporated into brain networks like microchips and computer software which may aid in the prognosis of diseases like Alzheimer’s and epilepsy.

Basically, the researchers revealed that glia cells do much more than just holding the neuron cells together, as they function as central instructors in the brain. Moreover, many experts are of the opinion that glia cells could help the neurons accomplish certain tasks that they may not be able to carry out singlehandedly.

The aforesaid model may lead to the formulation of better brain inspired algorithms and microchips that replicate neuronal networks. This research is published in the journal, PLoS Computational Biology.